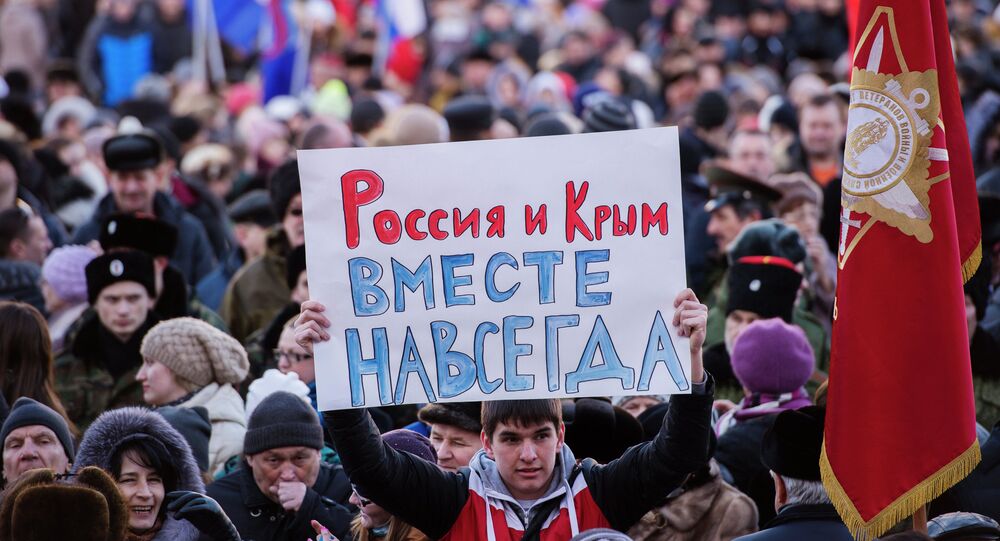 Crimean people feel real freedom because after the 2014 reunification of Crimea with Russia three official languages were adopted of the republic, permanent representative of the Crimean Republic to the president of Russia Georgy Muradov told Sputnik.

© Sputnik / Vladimir Astapkovich
Over 350,000 Russians Mark Crimea Reunification Anniversary
MOSCOW (Sputnik) — The March 2014 reunification of Crimea with Russia is a real example of democracy that improved the freedom of language, among other things, permanent representative of the Crimean Republic to the president of Russia Georgy Muradov told Sputnik.

"Crimean people feel real freedom now. They can be shown as the real example of democracy because… when they came to Russia, three official languages are adopted of the Autonomous Republic of Crimea. It is Russian, Ukrainian and Crimean Tartar language," Muradov said.

Muradov added that Crimea does not need international recognition, as Crimean people understand that reunification was a result of a legitimate referendum, allowing them to express their will.

"We don't need any international recognition because Crimea is a part of Russia. But I would like to say that it was no annexation of Crimea, it is the will of the people of Crimea which were under danger. And they acted according to the Constitution of Ukraine, to the principles and points of the international law conventions, including the Convention for Human Rights of the United Nations," Muradov added.

On March 11, 2014, following a coup in Kiev, Crimea adopted a declaration of independence from Ukraine, asking for reunification with Russia. On March 16, 2014, some 96 percent of Crimean voters chose to rejoin Russia in a referendum.

The West and Kiev refused to recognize Crimea as a part of Russia, arguing that the March 2014 referendum was illegal and violated Ukraine's territorial integrity.