A photo of the new Russian tracked armored vehicle Kurganets-25, made during Monday’s rehearsal of the upcoming May 9 Victory Day parade on Red Square, is now available on the Web.

The tryout in Alabino, just outside Moscow, featured a group of partially camouflaged armored vehicles rolling past. The Kurganets-25 provides a high degree of commonality with the new T-14 Armata heavy battle tank, whose photo earlier appeared online, Military-informant.com reported.

The Kurganets-25 will evolve into various models, gradually replacing BMP and BMD and MT-LB and other types of tracked armored platforms. It will have modular armor that can be upgraded for specific threats, a 2A42 30 mm cannon, and four Kornet-EM anti-tank guided missile launchers.

The Kurganets-25 is fully amphibious, propelled in the water by two water-jets at the rear of the hull. 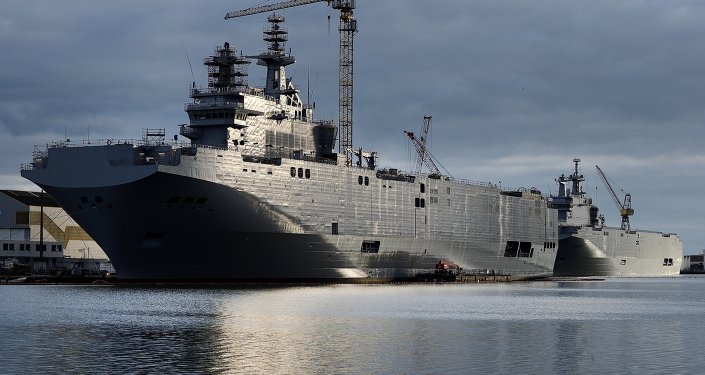 © AFP 2019 / JEAN-SEBASTIEN EVRARD
'Nothing Super Hard About It': Mistral-Like Ships Could Be Built in Russia
The vehicle uses a new technology for amphibious operation which increases the speed in the water up to 10 km/h.

The vehicle will be equipped with automatic fire control system which is able to automatically select targets.

'Nothing Super Hard About It': Mistral-Like Ships Could Be Built in Russia