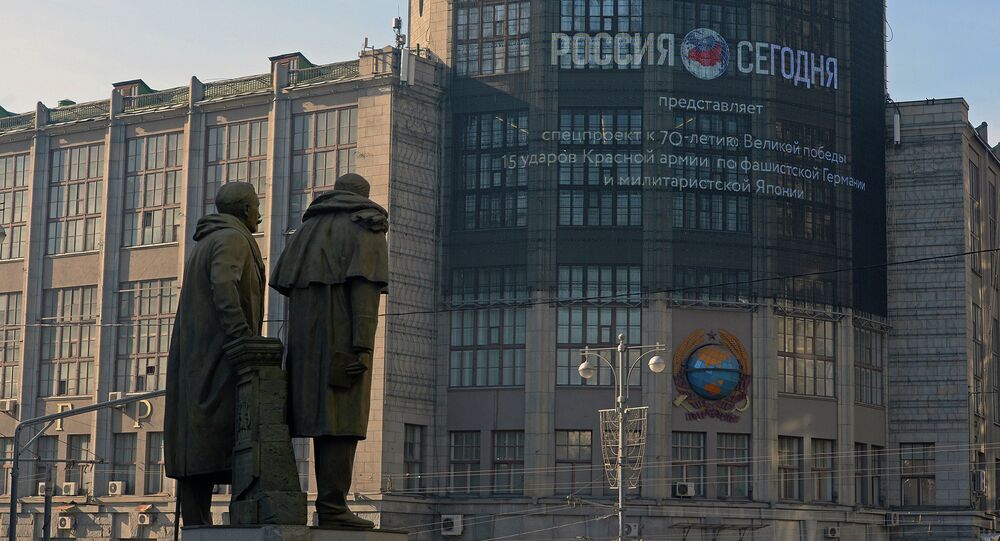 The online campaign to mark the 70th anniversary of Victory in World War II will include 15 multimedia articles about the war in English and Chinese.

MOSCOW, March 19, 2015, Rossiya Segodnya's Press-Office —  International multimedia group Rossiya Segodnya is launching a communications campaign to mark the 70th anniversary of Victory in World War II. The campaign will run through the end of the summer. The results will be released on September 2, to coincide with the date of the end of WWII.

The Fifteen Strikes by the Red Army historical sketches, dedicated to important WWII battles, will be broadcast on the agency's website and media screens in Russian cities — Moscow, St. Petersburg and Yekaterinburg. The multimedia Internet projects will be presented in the popular longread form. Media screens will be used to depict WWII-related events, while 15 multimedia articles about the war will also be published in English and Chinese.

The agency has created multimedia longreads about WWII's most important battles for the project. The first focuses on the Battle of Stalingrad. It provides a comparative analysis of the opposing forces, while highlighting the experiences of generals and soldiers, who share their perspectives about the battle. The project also covers the battles of Kursk, Leningrad-Novgorod, Dnieper-Carpathian, Crimea operations and Operation Bagration, among other key events during the war.

Each multimedia article uses a variety of formats, such as rare footage from archived newsreels, detailed maps that were recreated using modern technology, infographics and audio and visual effects. The agency's own archives and the archives of the State Committee for Radio and Television were used to create the project.

"Generally, many people do not look for information about the military operations of WWII in textbooks or monographs. Meanwhile, they include many interesting facts that are often not mentioned elsewhere. If the information is presented in an appealing and technically advanced form, it will provide an enjoyable and exciting experience for broad audiences," Kirill Kiryanov, chief editor of main Agency's web site Ria.ru, said.

The project will be conducted in an online and offline format. Indoor and outdoor campaigns will be held in Moscow, St. Petersburg and Yekaterinburg during the launch of the section on www.ria.ru/15udarov.

Videos about the most important WWII battles will be broadcast on media screens in Moscow, such as the Oktyabr movie theater on Novy Arbat, the Moscow Telegraph, and the high-rise buildings on the Mozhaiskoye, Leningradskoye and Volokolamskoye highways. Rossiya Segodnya's videos will also be shown on displays on public transport in St. Petersburg and Yekaterinburg.

The LBL communications group (media screens) and the 1PTV company (TV on public transport) have teamed up to support the Fifteen Strikes by the Red Army project.