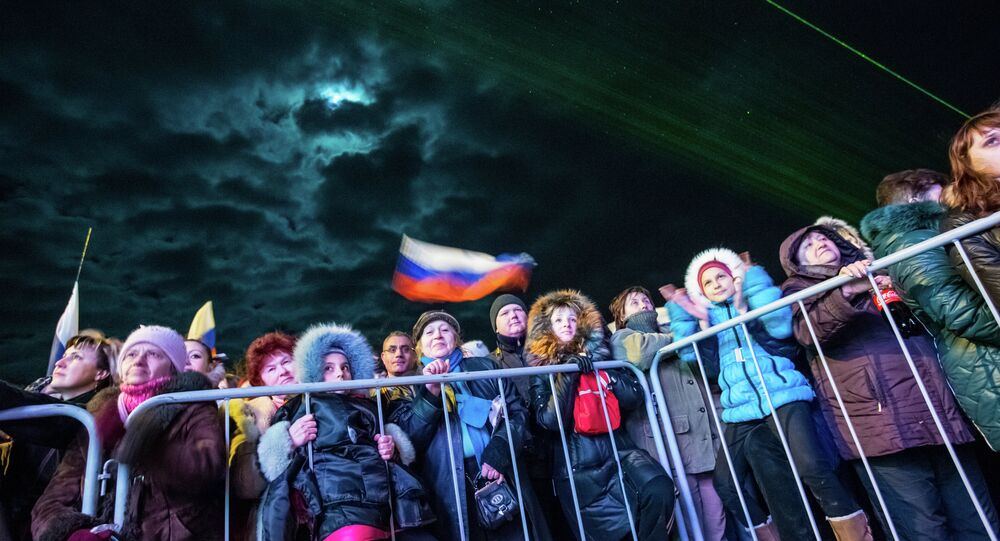 On March 16, 96.77 percent of Crimea residents voted for reunification with Russia.

© Sputnik / Andrey Iglov
'Crimea - Way Back Home': Peculiar Details and Curious Facts Revealed
MOSCOW (Sputnik) — A year ago, a referendum on Crimea's status was held, with more than 90 percent of voters supporting the republic's reunification with Russia.

On February 22, 2014, there was a power shift in Ukraine that had the attributes of a coup d'etat. The Ukrainian parliament, the Verkhovna Rada, ousted then President Viktor Yanukovych from power, changed the constitution, and set new presidential elections for May 25.

© Sputnik / Konstantin Chalabov
Top-15 Amazing Places in Crimea Worth Seeing
15
On February 23, more than 20,000 people gathered on Nakhimov Square in downtown Sevastopol for the "people's will" rally. The participants expressed their mistrust of the local authorities and Ukraine's Verkhovna Rada. The city's residents unanimously voted for businessman Alexei Chaly to become the city's new mayor.

The city council voted for the creation of an executive committee headed by Alexei Chaly. Since February 24, the city residents have been holding rallies in the city center in support of Chaly. Ukrainian military units have also been picketed with appeals not to turn weapons on the people.

© Flickr / d1mka vetrov
Crimea a Year Since Reunification With Russia: Looking Boldly to the Future
On February 25, pro-Russian Crimean residents launched an open-ended rally outside the Supreme Council building demanding that legislators not recognize the new leadership that had come to power after riots and unrest in Kiev.

On February 26, Crimean Tatars who supported the regime change in Ukraine also gathered outside the parliament building. The two groups of protesters clashed, which resulted in 35 people being injured.

In the early hours of February 27, the Russian-speaking population’s self-defense forces occupied the buildings of the Supreme Council and the Council of Ministers of Crimea.

The Crimean Supreme Council called for a referendum on expanding the powers of the autonomous republic to be held on May 25. The referendum was to include one question: "Do you support the state self-determination of Crimea as part of Ukraine on the basis of international treaties and agreements?"

The Crimean Supreme Council dismissed the government of the autonomous republic, and on February 28, a new Cabinet of Ministers was formed.

In the early hours of March 1, unidentified armed individuals attempted to seize the buildings of the Supreme Council and the Council of Ministers of Crimea.

On March 6, the Crimean parliament voted for the autonomous republic's reunification with Russia. The referendum date was moved to March 16. Crimean residents were asked two questions at the referendum: "Do you support the reunification of Crimea with Russia as a constituent entity of the Russian Federation?" and "Do you support the restoration of the 1992 Constitution of Crimea and the status of Crimea as part of Ukraine?"

© Sputnik / Konstantin Chalabov
Russia Never Sent Troops to Ukraine, Personnel Number at Crimean Base Was Regular - Putin
The Supreme Council of Crimea also addressed the Russian president and the Federal Assembly with a proposal to initiate procedures for Crimea to join the Russian Federation as its constituent entity.

On March 7, the State Council of Sevastopol, in a special session, decided that the city would become part of the Russian Federation. Additionally, the Sevastopol city council also spoke in favor of the Crimean Supreme Council's decision to hold the all-Crimean referendum on March 16.

On March 11, 2014, the Supreme Council of Crimea adopted a declaration in support of the region's independence from Ukraine and its intent to reunify with Russia.

The declaration noted that the Crimean parliament and the Sevastopol city council had made the decision based on the UN Charter and a number of other international documents which stipulate a people's right to self-determination.

© Flickr / thisisbossi
A Reality Check for the US State Department: 98% of Crimean Tatars Obtain Russian Passports
The declaration also said that the decision was made, taking into account the fact, upheld by the UN International Court on July 22, 2010, regarding Kosovo, that a unilateral declaration of independence by a part of a state does not violate international law.

On March 16, the referendum on the region's future took place. The vast majority of the voters (96.77 percent) supported reunification with Russia. According to Mikhail Malyshev, head of the Crimean referendum commission, voter turnout was 83.1 percent.

© Sputnik / Vladimir Astapkovich
Europe After Russia-Crimea Reunification: End of Outdated Security System
On March 18, the Russian president, Crimean leaders, and the mayor of Sevastopol signed a treaty on the accession of the Republic of Crimea and the city of Sevastopol to Russia.

Russia's State Duma, the lower house of the Russian parliament, and the Council of the Federation subsequently approved the treaty.

On March 21, Vladimir Putin signed a law to ratify the treaty on the accession of Crimea and the city of Sevastopol to Russia, and a federal constitutional law for the procedure of their incorporation into Russia.