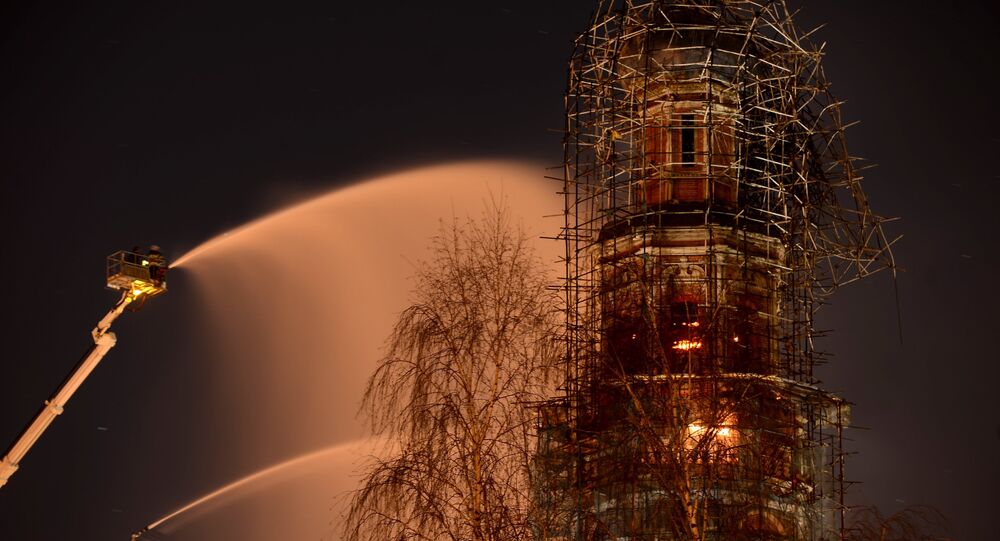 According to Russian Deputy Minister of Culture Grigory Perumov, the Novodevichy bell tower caught on fire would be restored.

MOSCOW (Sputnik) – The bell tower of Moscow's 16th century Novodevichy Convent is ensured and will be restored after the fire, Russian Deputy Minister of Culture Grigory Perumov said early on Monday.

"Judging from its appearance, problems will arise only because of soot covering the object [tower], but in any case, we will restore everything, the object had been ensured and there is a contractor's guarantee, so everything will get done," Perumov said.

The Novodevichy bell tower, which has been under renovation, caught on fire earlier in the night. A witness told RIA Novosti that no other parts of the monastery were affected by the blaze.

© Sputnik / Vladimir Astapkovitch
Fire Rips Through World Heritage Site Church in Moscow
According to a representative of the Moscow branch of the Russian Emergencies Ministry, the fire was fully extinguished by 01:23 Moscow time on Monday (22:23 GMT on Sunday).

Alexander Gavrilov, first deputy director of the Moscow branch of the Russian Emergencies Ministry, said that the inner structure of the Novodevichy Convent did not suffer any significant damage as a result of the fire.

"Emergencies Ministry staff have already entered the bell tower and went up to its top floors, there is no smoke inside the tower, several blazes had erupted on the structures surrounding the tower. All of them have been put out by now, no property inside the bell tower was damaged," Gavrilov said.

According to the Emergencies Ministry representative, the fire burnt only on the outside of the tower, on balconies and scaffolds. Inside the tower, only a wooden plank supporting the dome was damaged.

Russian deputy minister of culture Perumov also said that only the scaffolds had been on fire, which started under the tower's dome and spread downwards along the outside wall, failing to penetrate inside the Novodevichy bell tower.

"The blaze affected only the scaffolding, the fire did not get inside the bell tower, so we hope that the building suffered only surface damage that can be compensated," Perumov said.

He declined to comment on the possible causes of the fire, but confirmed that all renovation work on site ended early Sunday morning.

Earlier, Moscow Deputy Mayor Pyotr Biryukov told journalists that the fire on the Novodevichy bell tower was most likely caused by negligence. However, a representative of "Stroykomplekt," a contract company conducting renovation work at the convent, said that construction workers could not have been responsible for the blaze as they had left the convent at 11 a. m. Moscow time on Sunday.

The representative also said that power to the temporary wiring on site was completely cut off when the workers left the convent on Sunday. This information was confirmed by Perumov, who stressed that there could not have been any construction workers or convent inhabitants on the bell tower when the fire erupted, as the site has been completely closed off amid repair work.