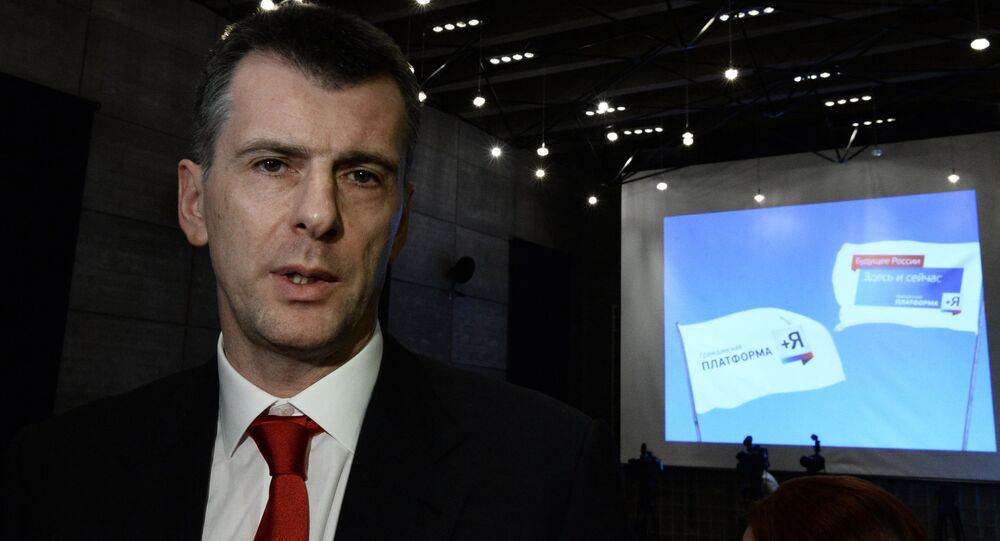 Tycoon Mikhail Prokhorov, who was a founder of the Civic Platform party, announced that he was quitting the party.

MOSCOW (Sputnik) – Russian billionaire Mikhail Prokhorov said Friday he was quitting the Civic Platform party, which he created in 2012, stating that the party "has discredited itself."

Last month, Prokhorov blasted the party leadership for participating in a February 21 Antimaidan rally in Moscow, which he said "had nothing to do" with the party's initial goals or ideology.

"I would like to suggest for discussion the following issue: a request to the party congress to either dissolve the party that had discredited itself or at least to rename it," Prokhorov said.

© RIA Novosti . Valery Melnikov
Insiders Keep Silent on Rumoured Sale of Russian Billionaire's US Basketball Team
The businessman-turned-politician added he would carry on supporting some of the party's key projects.

Prokhorov, who is reported by Forbes magazine to be worth more than $10 billion, is the former president of the ONEXIM Group, one of Russia's major private investment funds. He left the position to enter politics in 2011.

Prokhorov came third in the 2012 Russian presidential election winning 8 percent of the votes as an independent candidate.

The Civic Platform party has no seats in the Russian parliament, as it was created a year after the last State Duma elections in 2011.

Prokhorov’s Sister to Take Lead of His Opposition Party