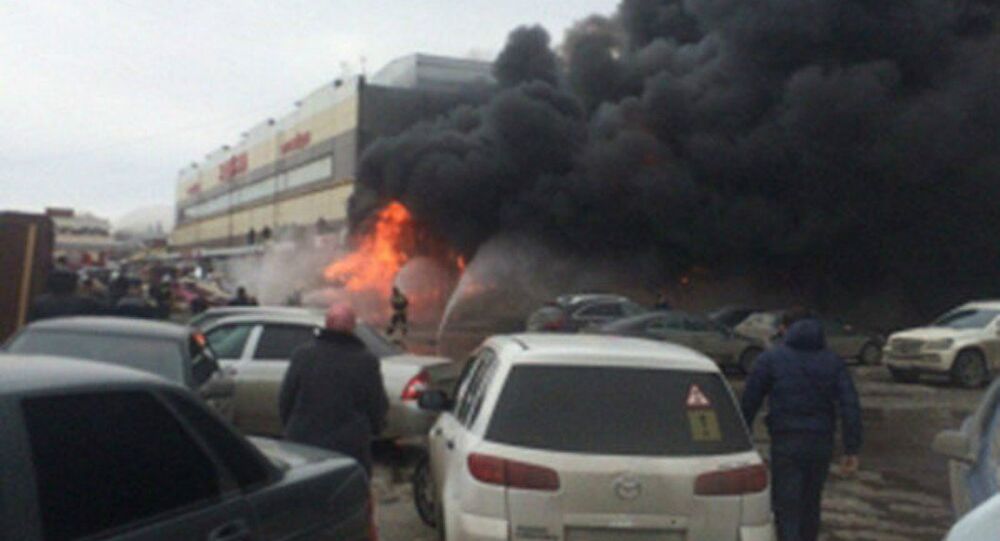 The number of people thought to have lost their lives in the blaze has risen after they were reported missing by relatives.

© Photo : Emergency Ministry
Ferocious Fire in Kazan Leaves Four Dead and Dozens Injured (VIDEO)
Rescuers working to free people from the ruins of a shopping center which caught fire on Wednesday in Kazan, Tatarstan, have said that five people are confirmed to have lost their lives and another 25 are feared dead after the building collapsed, according to media reports.

"There are around 25 people who it has not been possible to contact," Igor Panchin, head of emergency services for the Kazan region, told RIA Novosti. "Statements have also been taken from  people who were working in the shopping center," said Panchin, adding that it will take the search and rescue team at least two days to search the collapsed structure.

Vesti.ru reports that 789 firefighters, three helicopters and 137 units of equipment including fire engines and excavators have been deployed in the rescue operation at the 4,000 square meter Admiral shopping center. According to emergency services, the blaze had already reached more than 100 square meters in size before the arrival of the first firefighters at the scene.

© Sputnik / Sergey Pyatakov
Crude Oil Train Derails, Catches Fire in Illinois, Evacuation Announced
Around 400 visitors and 250 workers were evacuated from the building on Wednesday afternoon after the fire broke out in a cafe on the second floor of the center, and 16 people were reported on Thursday to be remaining in hospital.

Emergency services told the media that the fire, which is thought to have been started due to an electrical fault, quickly took hold after cafe staff tried to put it out, only making the call to the emergency services after several minutes had passed.

"The external doors were open, allowing air to circulate and the fire to spread quickly through the main building of the shopping center," said authorities, adding that their investigations so far have uncovered several fire safety violations in the building, citing in particular the low fire resistance of the metal structures, amounting to only 15 minutes of resistance.

Over 160 Rescued From Mine Fire in Sweden