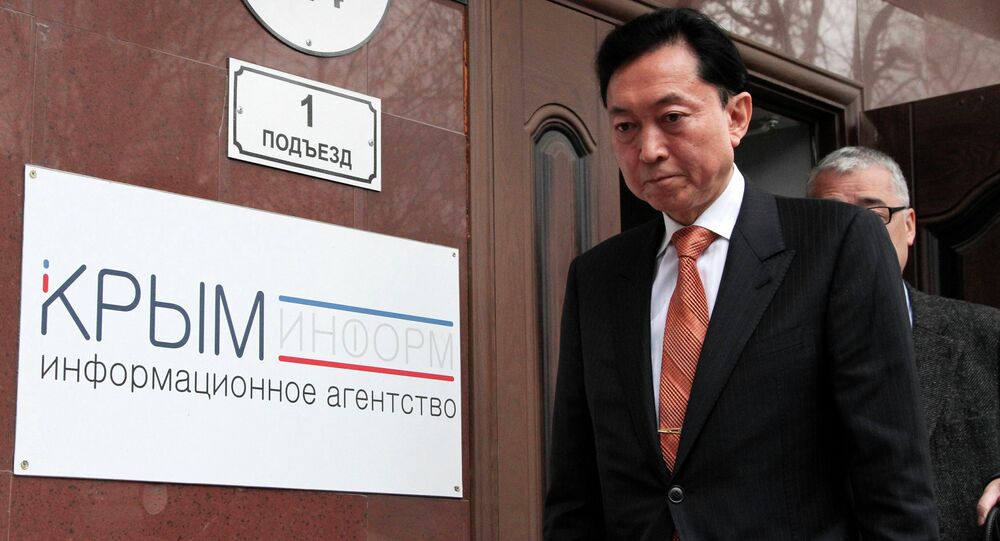 Yukio Hatoyama, a former Japanese Prime Minister, has said that he won't rule out moving to Crimea if Japanese authorities took away his passport.

© Sputnik / Artem Kreminsky
Japan Should Recognize Crimean Referendum, Lift Russian Sanctions – Ex-PM
Former Japanese Prime Minister Yukio Hatoyama, continuing his goodwill visit to Crimea, has stated that he would consider moving to the peninsula if Japanese authorities were to take away his passport.

"If such a danger were to emerge, I would not exclude the possibility of accepting the invitation of Mr. [Oleg] Belaventsev [to set up residence in Crimea]. I am grateful for it."

On Wednesday, Liberal Democratic Party politician Takashi Fukaya bashed Hatoyama, suggesting that Japanese authorities should take away his passport, Japanese internet news service Blogos reported. Fukaya noted that Hatoyama's visit to Crimea (which is not officially recognized as a part of Russia by Tokyo) as akin to "treason."

In response to Fukaya's statement, Oleg Belaventsev, Presidential Envoy to Crimea, told Hatoyama that "if your democrats give you a hard time, we will welcome you here at once. Stay with us; we are always happy to be among friends."

Hatoyama has gained the ire of Tokyo for his decision to visit Crimea this week. Explaining that he wanted "to see with my own eyes how people in Crimea are feeling," the former Prime Minister has since concluded that he believes that Crimea's decision to separate from Ukraine and join Russia last year was an expression of "the real will of the Crimean people." Hatoyama has also stated that it is time for Japan to renounce its sanctions policy against Russia.

© AP Photo / Yoshikazu Tsuno - Pool/Getty Images
Japanese Cabinet Secretary Calls Ex-PM's Visit to Crimea ‘A Thoughtless Move’
Hatoyama, who served as Prime Minister of Japan from September 2009 to June 2010, has since come to run the "Japan-Russia Society," and organizes an annual Russian-Japanese cultural exchange festival. He has repeatedly stepped out in favor of Japan conducting itself more independently from the United States in its foreign affairs policy.

Japan joined in with US and European anti-Russian sanctions in March, 2014, postponing talks on international investment, collaboration in space research and plans for a simplified visa regime. Japan has not recognized the results of the Crimea referendum on independence from Ukraine and reunification with Russia.