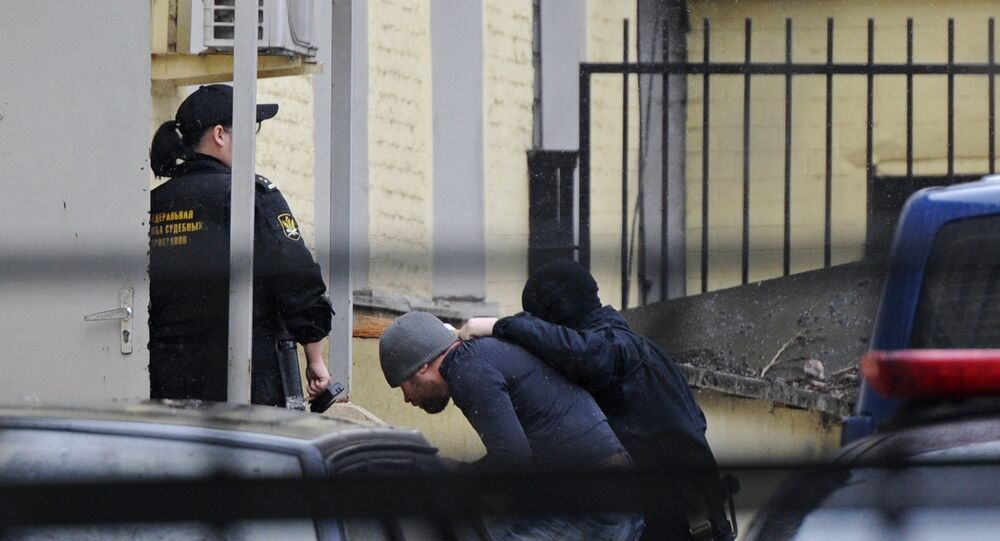 Dozens of police vans, buses, tow trucks and patrolmen have been posted on the court's premises, where scores of journalists are awaiting the suspects to be transported from their detention center.

© Sputnik / Iliya Pitalev
Four Suspects Detained in Connection With Nemtsov Murder – Security Council
MOSCOW (Sputnik) — Security measures have been stepped up near Moscow's Basmanny District Court where it is expected to consider a request for the arrest of suspects in the murder of Russian politician Boris Nemtsov, RIA Novosti reported Sunday.

Dozens of police vans, buses, tow trucks and patrolmen have been posted on the court's premises, where scores of journalists are awaiting the suspects to be transported from their detention center. Guard rails have been readied, but the area has not yet been cordoned off.

© Sputnik / Ramil Sitdikov
Two Suspects Arrested in Nemtsov's Murder Investigation
Later in the day, reports emerged that two more alleged accomplices from southern Russia's Caucasus region have been apprehended. One of the detained, according to the region's Republic of Ingushetia Security Council spokesman, was Gubashev's younger brother.

The spokesman added that Dadayev served as deputy commander of one of the Chechen Republic Ministry of Internal Affairs battalion units, while Gubashev worked in a private security firm in Moscow.

© AP Photo / Daria Buznikova
Key Witness in Nemtsov Murder Threatened in Ukraine
Shortly after the tragedy, Russian President Vladimir Putin ordered the Russian Investigative Committee, the Interior Ministry and the Federal Security Service to set up a joint team to investigate the murder.

Investigators have been pursuing several motives behind Nemtsov's murder, including possible links to the Ukrainian crisis, contract killing or business-related disputes.

Highlights of Funeral March in Memory of Boris Nemtsov in Moscow