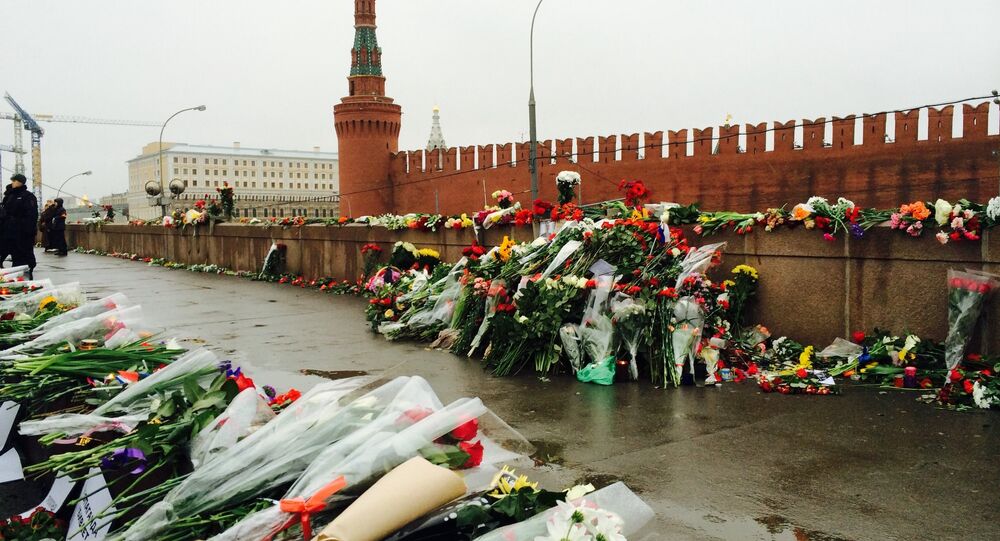 The white, government-owned Ford Mondeo sought in connection to the murder of opposition politician Boris Nemtsov was being used as an illegal taxi by a government employee on the night of the murder, LifeNews reports.

© Sputnik / Ilya Pitalev
Mourners Pay Last Respects to Russian Politician Boris Nemtsov
On Wednesday, Russian media reported that authorities were searching for a vehicle believed to belong to the Ministry of Finance in connection with the investigation of the murder of Boris Nemtsov.

The vehicle was recorded on Kremlin security cameras circling the Bolshoi Moskvoretskiy Bridge three times over the course of an hour.

In an interview for LifeNews, the vehicle's driver, 41-year-old Dmitri Karamza, explained that he was using the car to make some money on the side as an illegal taxi service. Karamza told the news agency: "I was driving over the bridge at about 23:30-23:40, in the second lane, about 70 kilometers an hour. At that moment I noticed a patrol car, and then that there was someone laying on the sidewalk. My first reaction was that someone had fallen ill. I even thought that maybe it was a drunk [laying there]. And only after I returned home and turned on the news did I realize what had happened."

© Sputnik / Iliya Pitalev
Eyewitness of Nemtsov's Murder Failed to Get Good Look at Killer, His Car
Karamza is yet to be questioned by authorities, although his work colleague has been questioned by traffic police and released. Karamza's superiors have asked him to explain why he was using a work vehicle as a private taxi, and to provide them with a detailed route on the night of 27-28 February.

Nemtsov was killed with four bullets to the back from a Markov pistol, after which his killer got in a waiting vehicle and left. Police operation 'Interception', organized shortly after the killing, was not successful in catching his killers, and the investigation is ongoing.

© REUTERS / Maxim Shemetov
Eyewitness to Nemtsov's Murder Arrives in Kiev
55-year-old Nemtsov, an opposition politician who once held high positions during the late Yeltsin administration, was shot dead on Friday night while walking across a bridge in central Moscow with his girlfriend, 23-year-old Ukrainian model Anna Duritskaya, who has since gone back to Ukraine.

On Wednesday, Russian President Vladimir Putin, who had earlier vowed to personally oversee the investigation into Nemtsov's murder, commented that Russia must forever rid itself of the tragedy and shame surrounding politically motivated crimes. "The most serious attention must be given to high-profile crimes, including those that are politically motivated. We must finally rid Russia of the tragedy and shame like the one we recently witnessed and experienced… [with] the brazen murder of Boris Nemtsov, right in the center of the capital," Putin said.