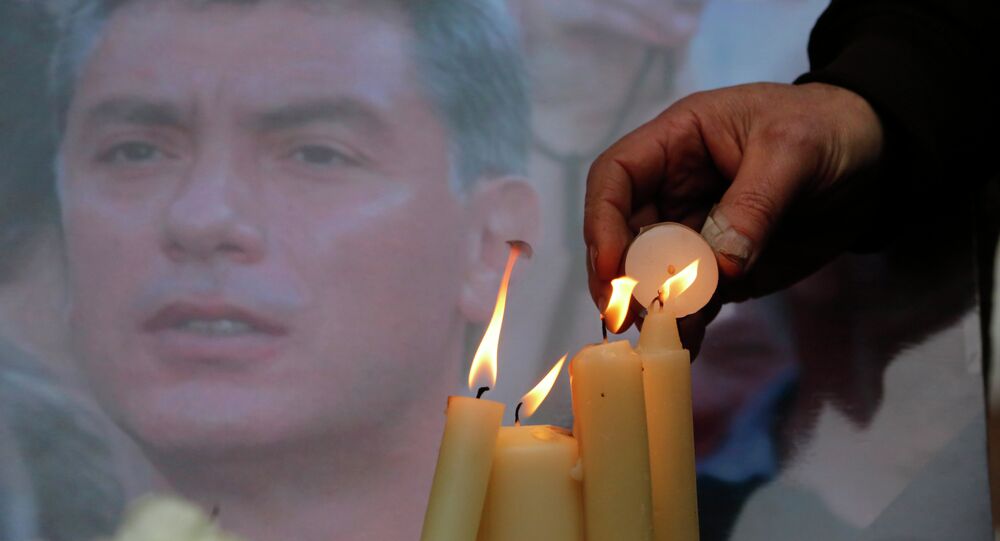 The Russian Investigative Committee has offered about $50,000 reward for valuable information on murder of politician Boris Nemtsov.

MOSCOW (Sputnik) — The Russian Investigative Committee offered a reward of about $50,000 for valuable information on the recent murder of opposition politician Boris Nemtsov, the committee said in a statement on Sunday.

© Sputnik / Ekaterina Imasheva
Highlights of Funeral March in Memory of Boris Nemtsov in Moscow
“Operational units carrying out the support of the criminal investigation [of Nemtsov’s murder] are ready to pay a reward of 3 million rubles [more than $48,500] for the information valuable for the investigation,” the statement reads.

The committee guaranteed anonymity to the informants.

Earlier in the day, Russian Investigative Committee announced a search for witnesses of the murder. The investigators consider several theories, including a possible contract killing.

Nemtsov was killed in Moscow at 11:40 pm on Friday, Moscow time (20:40 GMT), after four shots were fired in his back while he was walking with a female companion cross the Zamoskvoretskiy bridge, according to the Russian Interior Ministry.

A number of western leaders, including US President Barack Obama, French President Francois Hollande and German Chancellor Angela Merkel expressed their condolences to the family of Nemtsov and urged a prompt and transparent investigation.

Nemtsov has been in Russian politics for over two decades. He served as deputy prime minister and energy minister under the country's former President Boris Yeltsin. He co-chaired the RPR-PARNAS (Republican Party of Russia – People's Freedom Party) since 2012 and was also one of the leaders of the liberal Solidarnost movement. Nemtsov was more actively involved in business in recent years.