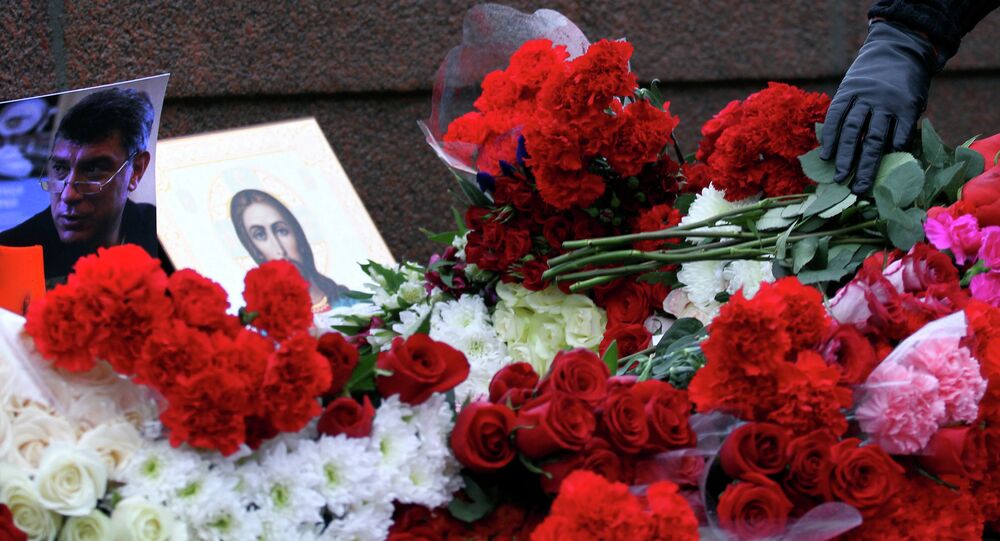 As fresh evidence of Friday night’s assassination of opposition politician Boris Nemtsov keeps cropping up, Moscow’s TVC channel showed footage of the murder caught on an all-weather camera. The low-resolution video hints that the killer may have been waiting for Nemtsov on the Bolshoi Moskvoretsky Bridge just outside the Kremlin.

© Sputnik / Vladimir Sergeev
Opposition Funeral March in Memory of Boris Nemtsov in Moscow Planned for March 1
The video shows Nemtsov and his female companion walking along the bridge. At 23:31 a snowplow catches up with them and hides the pair from view.

A moment later a man, possibly the killer, is seen running out from behind the snowplow and jumps into the waiting car. Just how he got on the bridge is hard to say though.

It looks like the murder was carefully planned in advance. It was initially announced that the getaway car was white, but, judging by the video footage, it was gray.

Eight shots were fired, possibly from a Makarov pistol, four of them found their target. Boris Nemtsov died on the spot.

At the moment, investigators are looking into five possible motives behind Nemtsov’s assassination.

According to Vladimir Markin, spokesman for the Investigative Committee, the murder could have been a provocation to destabilize the political situation in Russia.

Russian President Vladimir Putin said he will personally oversee the investigation of the assassination, which he called “vile and cynical.”