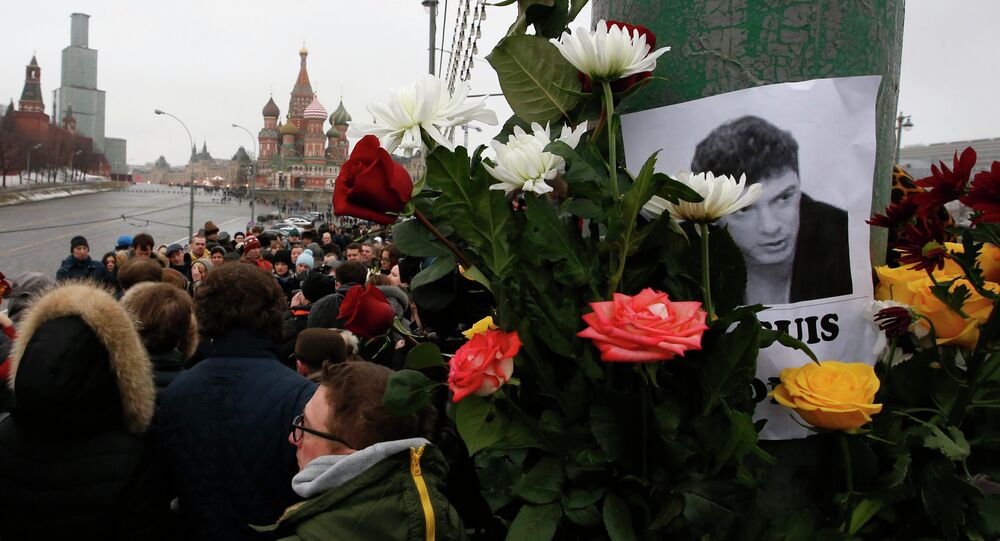 Director of Communications at the Council of Europe emphasized that the political nature of Nemtsov's murder was only an assumption and warned against speculation.

© REUTERS / Sergei Karpukhin
German MP Urges to Refrain From Sweeping Conclusions on Nemtsov’s Murder
MOSCOW (Sputnik), Alexander Mosesov — Russia, as well as the European Union, faces a risk of hatred and political violence in light of the murder of Russian opposition politician Boris Nemtsov, Director of Communications at the Council of Europe Daniel Holtgen told Sputnik on Saturday.

Daniel Holtgen was asked if, in his opinion, there was a risk of growing hatred and inter-political violence in Russia following Nemtsov's murder.

"Not only in Russia, but in other countries and regions as well, in Europe," Holtgen said.

The murder of Boris Nemtsov may have had political motives, Daniel Holtgen believes.

"This must have had some political background," he said. "We called the murder political because a well-known politician was shot, and there is no reason to believe it was random."

US Air Force / Staff Sgt. Suzanne M. Day
US Military Aid to Add Fuel to the Fire of Ukrainian Crisis – US Experts
He emphasized that the political nature of the murder was only an assumption and warned against speculation.

The Council of Europe's Secretary General Thorbjorn Jagland said earlier in the day in a statement that the politician's murder signaled the climate of hatred and intolerance that was developing in many parts of Europe nowadays.

"We must join forces to stop this dangerous development. I call on the Russian authorities to their utmost to bring the killers of Boris Nemtsov to justice," Jagland said.

Nemtsov was deputy prime minister under Russia's former President Boris Yeltsin in the 1990s, a co-chair of the RPR-PARNAS (Republican Party of Russia – People's Freedom Party) since 2012, and one of the leaders of the liberal Solidarnost movement.

An investigation into the politician's murder was launched by the Russian Investigative Committee, which is considering several versions, including possible connection between Nemtsov's death and the events in Ukraine, the Charlie Hebdo shooting in Paris and his business activity.