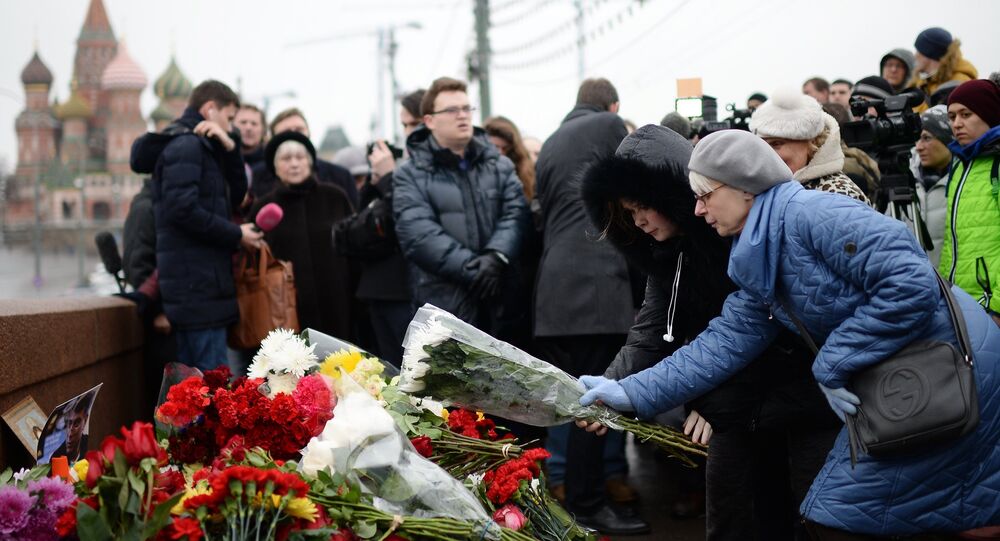 The politician was killed on Friday night, as several shots were fired at him from a car while Nemtsov was walking with a female companion in central Moscow.

“We gave an approval to hold this campaign. It is due to start at 15:00 p.m. (12:00 GMT),” the head of Moscow department for regional security told RIA Novosti, adding that the number of march participants could reach up to 50,000 people.

Meanwhile people are flocking to the the Zamoskvoretsky bridge in central Moscow, where the politician was killed, laying flowers and leaflets reading “Je suis Boris.”

© REUTERS / Sergei Karpukhin
Who Mr. Nemtsov Was and Why He Was Killed
In Yaroslavl, a total of 700 people came to the regional parliament building on Saturday to commemorate Boris Nemtsov, who served there as a lawmaker. People lit candles and put flowers next to the politican’s portrait photo.

Ceremonies commemorating Nemtsov are also being held in Saint Petersburg and other Russian cities.

Nemtsov served as Russian deputy prime minister under the country's former President Boris Yeltsin in the 1990s, was a co-chair of the RPR-PARNAS (Republican Party of Russia – People's Freedom Party) since 2012 and also one of the leaders of the liberal Solidarnost movement.

The Russian Investigative Committee launched a probe into the murder and is considering several versions, including a possible link of Nemtsov's death to the events in Ukraine, the Charlie Hebdo attack in Paris and politician's business activity.