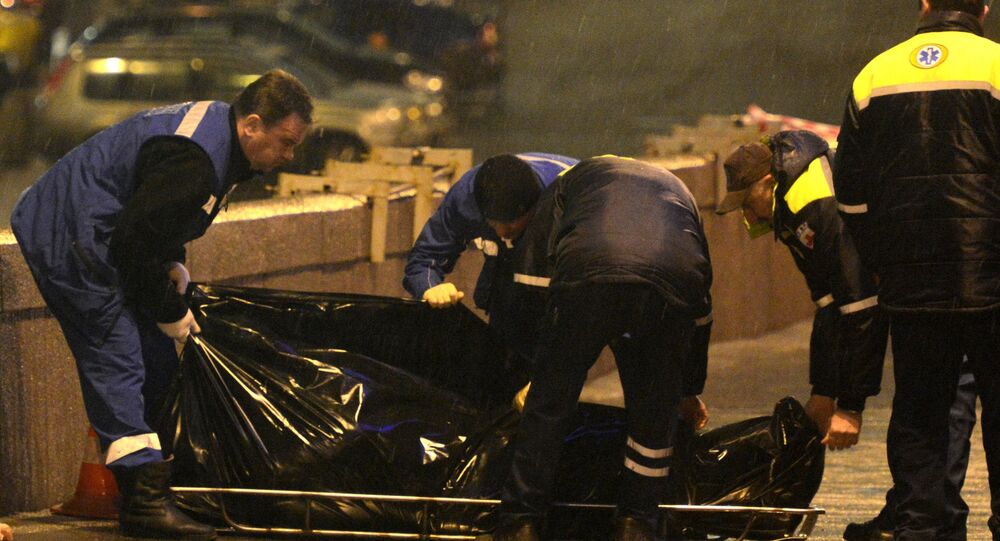 Four of the bullets hit Nemtsov's back, leading to his death. Six shell casings have been found at the site of the murder.

"A number of cars that have fallen under suspicion have been checked, their connection [to Nemtsov's murder] was not confirmed," the source said on Saturday, adding that the search for the car used by the murderer(s) continues.

According to the Russian Interior Ministry, Nemtsov was killed at 11:40 p.m. Moscow time on Friday (20:40 GMT), when several shots were fired at him from a car, while he was walking with a female companion from Ukraine in central Moscow.

© Sputnik / Iliya Pitalev
US Senator McCain Saddened by Nemtsov Murder in Moscow
Four of the bullets hit Nemtsov's back, leading to his death. Six shell casings have been found at the site of the murder, according to official representative of the Russian Interior Ministry, Elena Alekseeva.

Meanwhile Russian Investigative Committee spokesman Vladimir Markin announced that, according to preliminary data, a total of seven or eight shots were fired at Nemtsov from the car.

A law enforcement source told RIA Novosti that investigators working on the Nemtsov murder case have been looking for a white Ford Focus or Ford Mondeo.

Kremlin spokesman Dmitry Peskov announced that Russian President Vladimir Putin had ordered the Investigative Committee, the Interior Ministry and the Federal Security Service to set up an investigative team to look into the murder of Boris Nemtsov.

Putin emphasized that there was a high chance that the murder of the opposition politician was a contract killing.

© AP Photo / Ivan Sekretarev
Russian Politician Boris Nemtsov Killed in Moscow
Nemtsov, who served as Russian deputy prime minister under the country's former President Boris Yeltsin, voiced opposition to the current Russian government, Putin and his policies, although the politician was more involved in business than politics in recent years.

Nemtsov co-chaired the RPR-PARNAS (Republican Party of Russia – People's Freedom Party) since 2012 and was also one of the leaders of the liberal Solidarnost movement. His killing came one day ahead of the Vesna (“Spring”) opposition rally planned to be held in Moscow on March 1.

Another co-chair of the RPR-PARNAS political party, Mikhail Kasyanov, has told journalists that the Moscow rally will be turned into a funeral march, while rallies outside of the Russian capital will be held in accordance with earlier-agreed plans.