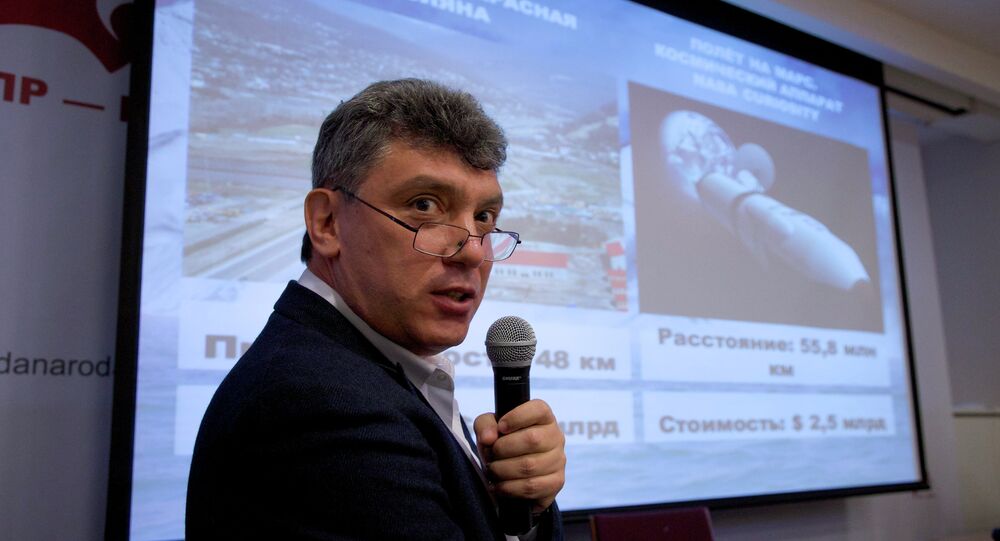 According to Moscow police, Nemtsov was walking near Red Square with a female companion when assassins opened fire on him.

"A car approached, from which several shots were fired.  Four shots hit Nemtsov in the back," Ministry of Internal Affairs spokesperson Elena Alekseeva said.

"The woman who was with him is at this moment being questioned at a Moscow police station."

Six shell casings were found at the scene of the murder. However, investigators think at least seven or eight shots were fired.

The court medical examiner later determined Nemtsov was killed by a bullet to the heart.

Moscow police are engaged in an active search for the shooter or shooters, who have not been identified. Several roadside police checkpoints have been set up in central Moscow.

Twitter user @molniatv tweeted "PHOTO. Pictures from the scene of the event #Nemtsov."

Nemtsov was 55 years old. He was born in Sochi. In 1985, he received his Ph.D in Physics and Mathemathics at the State University of Gorky. In 1991, Boris Nemtsov was appointed the governor of the Nizhny Novgorod Region. He also was a former deputy prime minister in the Russian government under President Boris Yeltsin. At one point he was considered a likely presidential candidate. After Vladimir Putin became the country's president, Nemtsov actively criticized the administration and its policies. Since September 2013 and until his death, Nemtsov served as a member of the Yaroslavl Region's parliament.

He was a member of the city council in Yaroslavl, near Moscow, and since 2012 he was co-chair of the Republican Party of Russia — People's Freedom Party (RPR-PARNAS). He was elected several times in the past as a member of the Russian parliament.

President Putin was immediately informed of Nemtsov's assassination, according to Presidential Press Secretary Dmitriy Peskov.  According to him, Putin expressed deep condolences to Nemtsov's family and loved ones.

"Putin emphasized that this brutal murder has all the signs of being ordered and is of an exclusively provocative character," Peskov said.

Putin ordered the creation of a joint investigative committee made up of various Russian law enforcement agencies.  Committee representative Vladimir Markin confirmed that the investigation is focusing on two charges: illegal transfer of arms and murder.

Police later identified a white Ford captured by security surveillance cameras, which cover the area because of its proximity to the Kremlin. They determined the license plate number of the vehicle, but released no information as to whom the vehicle belongs and to whether or not it was stolen.

Former Deputy Prime Minister in Putin's government Alexey Kudrin, who knew Nemtsov well, told RIA Novosti that "Nemtsov's murder is a terrible tragedy for Russia, and the investigation must be completed at all costs."

The shooting came two hours after Nemtsov gave an interview to the Echo of Moscow radio station about a demonstration planned for March 1. Co-chair of the RPR-PARNAS party Mikhail Kasyanov announced early Saturday that the march was cancelled because of Nemtsov's death.