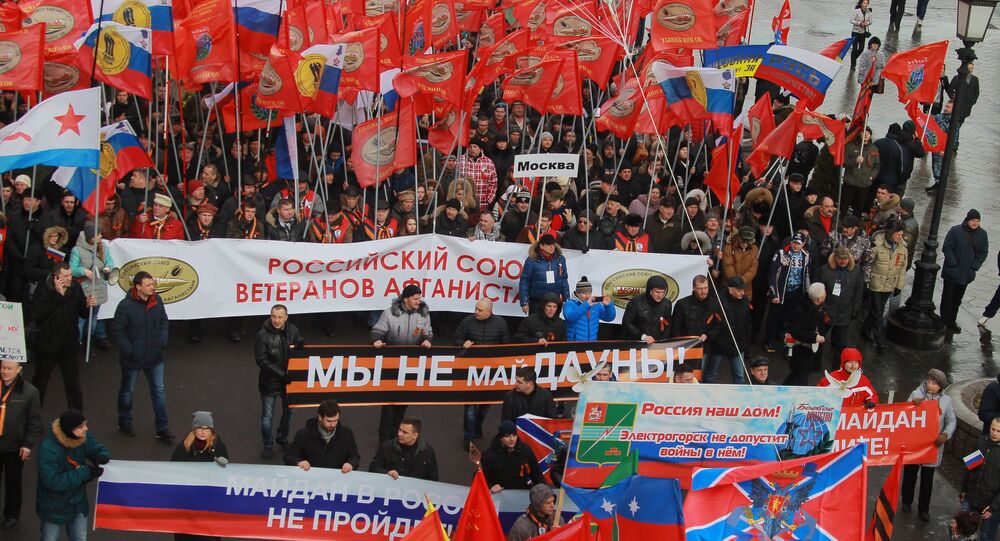 Some 40,000 people participated in a march condemning the last February coup in Kiev and deploring the great number of victims caused by it.

© Sputnik / Evgeny Kotenko
Bonfire of Illusions: Rally in Kiev on Maidan Anniversary
8
MOSCOW (Sputnik) — Some 40,000 people gathered in central Moscow on Saturday for a peaceful rally organized by the movement opposing the early 2014 government coup in Ukraine that lead to an armed conflict in the country, the Russian authorities said.

In February 2014, violent clashes with law enforcement officials broke out in central Kiev's Maidan square, or "Independence" in Ukrainian, claiming the lives of more than 100 civilians. The protests led to military confrontation between Kiev forces and independence fighters in eastern Ukraine.

"The march on Petrovka Street and the rally on Revolution Square, held in the framework of the 'Antimaidan' campaign under the slogan 'One Year to Maidan. Do Not Forget, Do Not Forgive!' concluded without incident," the Moscow Department of the Russian Ministry of Interior said in a statement.

According to the Interior Ministry, up to 40,000 people took part in the march. Police supervised the demonstration to prevent any potential unrest.

Demonstrators hoisted Russian flags and banners reading "Russia is Against Maidan," "Maidan Today, Tomorrow War?" and "We Won't Forget Our Brothers' Murders!" among others.

© REUTERS / Valentyn Ogirenko
Poroshenko Booed at Kiev’s Maidan During Ceremony Commemorating Protests
A political crisis erupted in Ukraine in November 2013, when the country's authorities announced to suspend its European integration process. The protests that started in Kiev spread across the country and led to a government coup in February, forcing then-President Viktor Yanukovych to flee the country.

Victoria Nuland and her cookies apparently not welcome in Russia. Pics from #Antimaidan rally http://t.co/gHJRQRnYnG pic.twitter.com/wYh0osXwK0