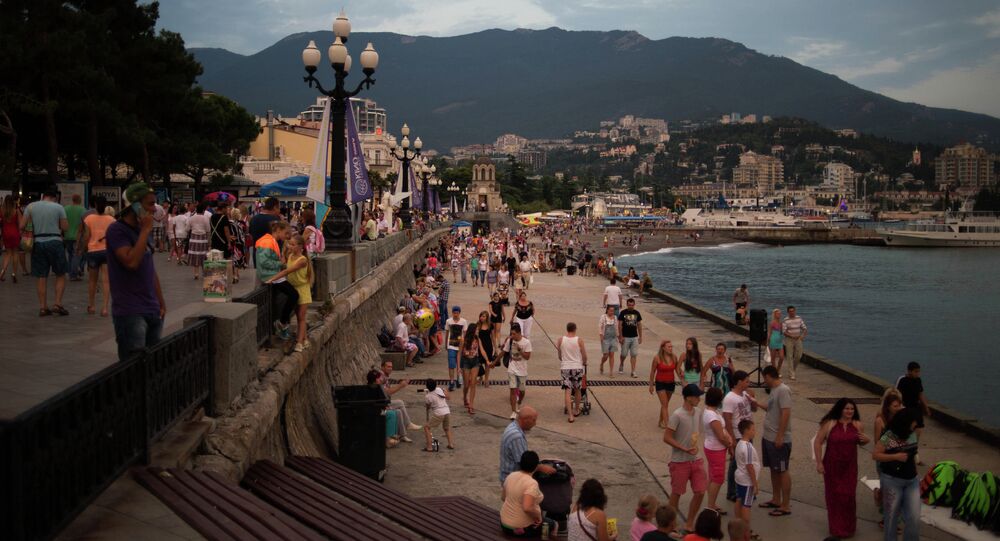 Domestic tourism has grown significantly amid Western sanctions, a declining exchange rate, and the growth of patriotism among Russians, says Oleg Safonov, the head of the country's Federal Agency for Tourism.

© Flickr / Alan Levine
Russia, Iran Working Toward Visa-Free Regime for Businessmen, Tourists
MOSCOW, January 30 (Sputnik) — Oleg Safonov, the head of Russia's Federal Agency for Tourism, told RIA Novosti news agency in an interview on Thursday that Western sanctions have had a significant positive affect on the growth of domestic tourism.

Speaking with the agency at the Fitur Tourism Fair in Madrid, Safonov explained that the growth in domestic tourism and the decline in foreign travel "is partly due to a rise in prices for outgoing tourism; people have begun to travel more inside the country." He noted that in 2014, tourism abroad declined by between 15-20 percent, most of the decline occurring in the last quarter of the year, with a decline of only 4 percent seen in the three quarters up to September.

However, Safonov noted that finances are really only half the story.

"An important role has also been played by peoples' increased level of patriotism. As you know, a series of completely illegal sanctions have been introduced in relation to Russia, and it is completely logical for people to conclude that when sanctions have been introduced against their country, this means that they are not welcome in the countries that imposed these sanctions." Additionally, Safonov cites the role of violations of Russian tourists' rights abroad in discouraging would-be tourists, noting instances of people being denied hotel reservations, service in restaurants, or entry to ski resorts.

© AP Photo / Korean Central News Agency
Pyongyang Invites English Speakers to Teach North Korean Tourism Students
"Despite the fact that everyone understands that tourism is outside politics, for many tourism has become an element of politics and of political influence," the agency head noted. "And so many Russians have made the decision not to travel abroad, and to go on holiday in Russia instead."

In view of sanctions and the growth in patriotism, Safonov cited the example of Crimea, noting that while the Federal Agency for Tourism had hoped that three million people would visit the peninsula in 2014, over 4.1 million ended up doing so, leaving behind over 107 billion rubles ($1.53 billion US). In comparison, when Crimea was part of Ukraine, only about one million Russians visited the area annually, despite an open border and favorably low prices.

Safonov explained that one of his agency's goals at present is to convince regional leaders on the importance of tourism to economic development as a whole, leading as it does to growth of small and medium-sized businesses, and to improvements in the areas of transport, communications, food services, agriculture, and construction, and dozens of other areas. "If the head of every region comes to understand that he has a chance [to achieve] economic development through tourism, his region will see investment, new jobs, and growing incomes," Safonov noted.

"We are only at the beginning of the path to solving our basic problem [in increasing domestic tourism]," the tourism head noted. "We have excellent prospects, and it is necessary only to implement them. Today, the share of Russian tourism in the world is less than one percent –this is an extremely low figure. Baikal, Kamchatka –these are unique places, but the number of tourists to these places is negligible. We need to compete on the world tourism market," Safonov explained. He added that Russia needs "to work on the continuous improvement of the quality of tourism services, including the experience of our foreign colleagues."

© Sputnik / Vitaliy Belousov
Israel to Lose $153Mln From Russian Tourism Decline Over Falling Ruble
Safonov told RIA Novosti that even the collapse of over two dozen Russian tour companies offering tours abroad last year had its positive effects, clearing the market of operators using unfair practices and "cleansing" it of margin operators. He noted that the New Year holidays were comparatively calm: "There were no negative incidents or the suspension of services from among any of the [tour providers]. Many experts had predicted a second wave of problems for the tourism market, but it can be argued with a high degree of confidence that this will not occur; the market has already been 'cleansed'."
...
Reddit
Google+
Blogger
Pinterest
StumbleUpon
Telegram
WhatsApp
153