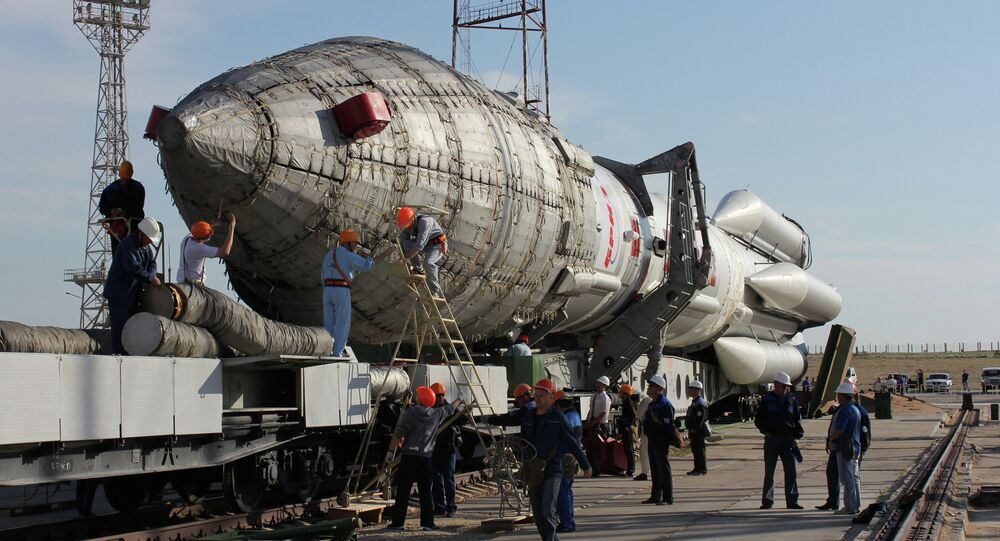 British Satellite to Be Launched by Russian Proton-M Carrier Rocket

A Proton-M carrier rocket and a British telecommunications satellite, Inmarsat 5F-2, have been delivered to the Baikonur cosmodrome in Kazakhstan ahead of the February 1 launch, Russia’s space agency Roscosmos announced on its website Thursday.

© Sputnik / Oleg Urusov
Russia Launches European Communications Satellite Atop Proton-M Carrier Rocket
MOSCOW, January 29 (Sputnik) — The launch, slated for 15:31 Moscow time on Sunday, will be the first in this year’s program. The contract to orbit the Inmarsat 5F2 was inked by the Russian-American International Launch Services Company ISL.

The Inmarsat-5F2, developed by Boeing Satellite Systems on a commission from Britain’s satellite communications operator Inmarsat, is the second of three 5th generation Inmarsat satellites. It is designed to provide communications services in North and South America, as well as in the Atlantic region.

The Proton rocket is due to put the British satellite in a super-synchronous transfer orbit at an altitude of 65,000 kilometers.

The launch had earlier been postponed from January 30 to February 1 upon the customer's request, due to technical reasons linked to pre-launch preparations of the spacecraft.

Russia puts off launch of Inmarsat satellite until Aug. 19