Medvedev Calls on Government to Halt Run on Food Prices

Russian Prime Minister Dmitri Medvedev has ordered the government to take all necessary measures to prevent the speculation-driven rise in food prices.

"Lately, because of the ruble situation and due to a number of other factors, we have seen a serious rise in the price of food. Even considering a record harvest, [upward] pressure continues to be present. In the cities it is even higher, for obvious reasons. In rural areas it has been lower, but is still present," the Prime Minister said.

"We must work together with the owners of grocery chains, farmers, and intermediaries who participate in these processes to do everything possible to prevent unjustified rises in prices," Medvedev noted. He clarified that he was talking about tackling the "speculative margin…based on several economic factors, including the situation with the currency." 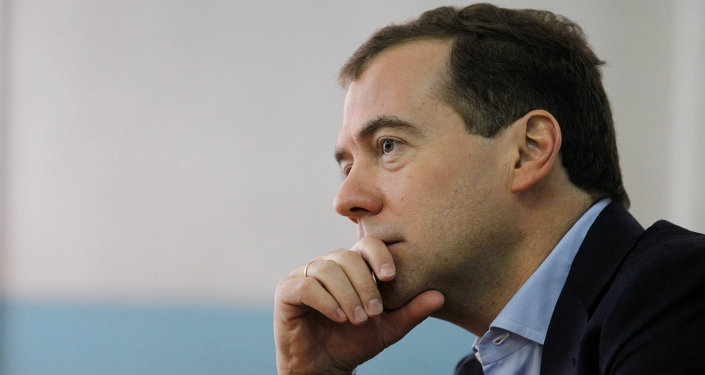 © Sputnik / Dmitriy Astakhov
Medvedev: Russia to Define Measures to Support Economy After Holidays
The prime minister told Fyodorov that he would like him to "join with the Federal Antimonopoly Service and, where necessary, with law enforcement agencies, in monitoring the situation [with regard to] food prices." He also asked the minister of agriculture to attract the attention of the [country's regional] governors to the problem.

In late 2014 Russia's Ministry of Economic Development estimated inflation for the year to have hit the 10 percent mark, while food prices are estimated to have risen by 13.1 percent, RIA Novosti explains.

The Russian Central Bank has estimated that inflation is likely to continue to rise by up to 11.5 percent in the first quarter of 2015 when measured in annual terms.

Fyodorov informed Medvedev that the country's grain harvest for 2014 had totaled 105.3 million tons, a record for Russia in its post-Soviet history. Late last month, the government had levied an additional 15 percent export duty on the export of grain in order to prevent companies from exporting the surplus in order to capitalize on fluctuations in the value of the ruble.

Medvedev: Russia to Define Measures to Support Economy After Holidays

Medvedev: Russian Offshores Will Be Denied Access to State Tenders