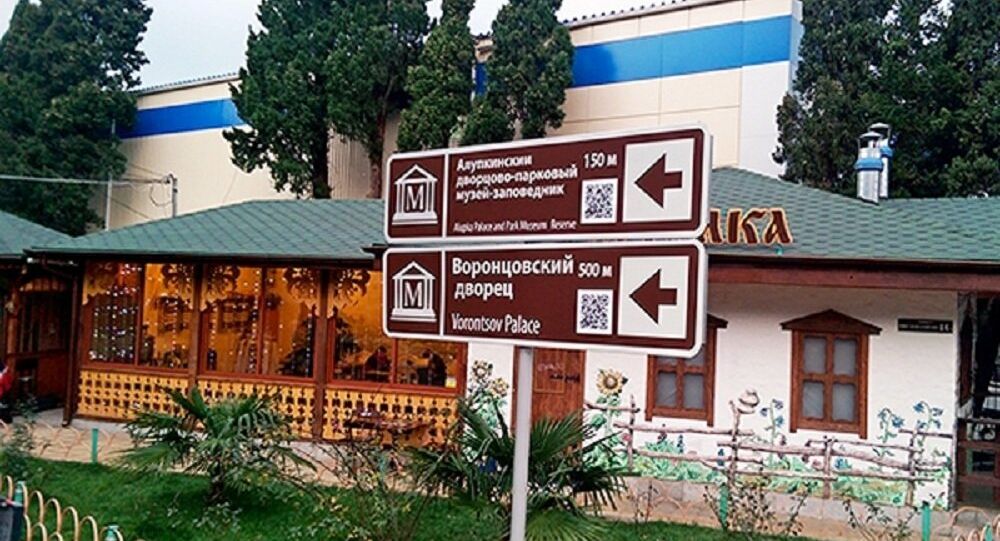 Crimean authorities have been working on a project to put up several thousand modern, interactive signs for tourists for the upcoming summer tourism season, directing visitors to historical and cultural heritage sights, nature preserves, resorts and hotels.

MOSCOW, January 7 (Sputnik) Crimea's regional government is in the process of setting up nearly 7,000 signs for tourists for the upcoming summer season, directing visitors to the peninsula to historical and cultural heritage sites, nature preserves, resorts and hotels, Rossiyskaya Gazeta has reported.

Crimea's Deputy Minister of Tourism and Resorts Olga Burova noted that the project has been implemented under the auspices of Russia's Ministry of Culture, and that "the signs are aimed at making tourists' travels to Crimea as comfortable as possible."

The signs, in Russian and in English and featuring QR codes, arrows and distance indicators, are already being set up in Simferopol, Evpatoriya, and in Greater Yalta. The Russian Ministry of Culture has allocated 23.5 million rubles (about $370,000) for the installation of the signs.

A similar project, called "RFQR Sevastopol," is being set up in Sevastopol, with local government and investors dedicating roughly 40 million rubles (about $630,000) to the project. In addition to the installation of signs, the "Open City" project for the Hero City will include the creation of a unified tourism internet portal, as well as interactive information kiosks, to be set up across the city.

Sevastopol's cultural and historical sites will be furnished with 1,050 QR codes, through which tourists will be able to receive detailed information about the city's attractions.

© Sputnik / Andrey Stenin
Russia, India Sign Agreement on Economic Cooperation in Crimea
Earlier in December, Russia and India signed a Memorandum of Understanding between the Republic of Crimea and the Indian business group Indian-Crimean Partnership, aimed at deepening India's economic cooperation with the peninsula. According to Crimean Prime Minister Sergei Aksyonov, the memorandum is aimed at creating a "high-tech bridge between both countries" via Crimea. Aksyonov had earlier noted that companies from across Europe and Asia had shown interest in investing into the region in areas including automotive manufacturing, tourism, agriculture, and energy.
© Sputnik / Tsvetelina Miteva
Russian Duma Approves Crimea Free Economic Zone
On January 1st, a law turning Crimea into a free economic zone stepped into effect. The law includes a series of incentives for business, including tax breaks, a preferential customs regime, and state rebates for companies providing employees with social and medical insurance and pensions. The law also simplified the process of issuing visas to tourists, businesspeople and officials, who are now able to receive a 30 day entry visa right at the border.
...
Reddit
Google+
Blogger
Pinterest
StumbleUpon
Telegram
WhatsApp
95