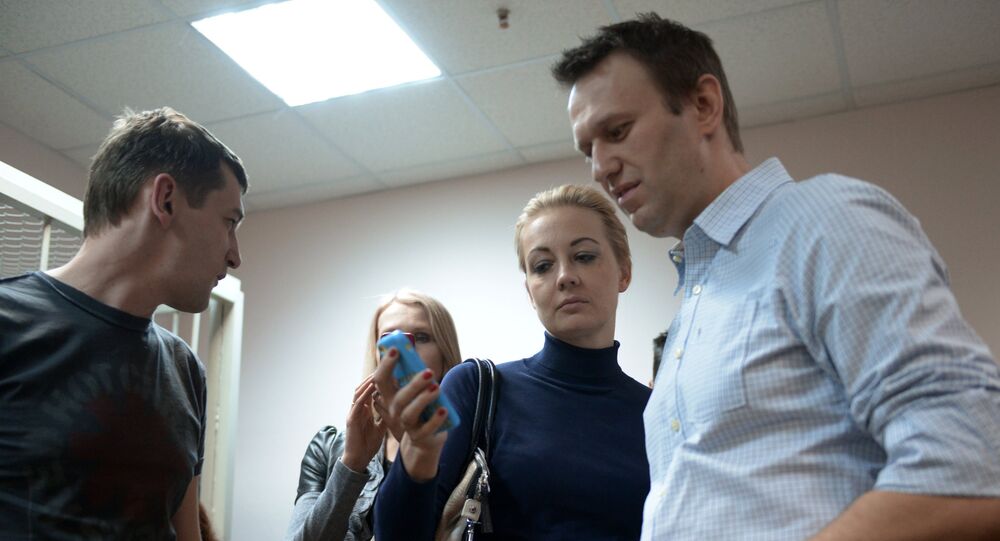 The Moscow court returned a second complaint on Russian opposition activist Alexei Navalny's violation of the terms of his house arrest to the Russian Federal Penitentiary Service (FSIN).

On Monday Navalny wrote in his blog that he had removed the electronic tag designed to monitor the movements of those subjected to house arrest. The same day law enforcement sources told RIA Novosti that the FSIN would verify this information and notify the Moscow court if Navalny had indeed taken his electronic bracelet off.

"The court has received today a notification on the violation of the terms of the house arrest by Navalny and has returned it to the [Federal Penitentiary] Service as the provisions laid down in the [Russian] Criminal Procedure Code do not provide for the court to examine such documents after the verdict on criminal case has been declared," the spokesperson said.

© Sputnik / Grigory Sysoev
Moscow Court Hands Opposition Figure Navalny 3.5-Year Suspended Sentence
On December 30, the opposition figure was given a suspended sentence of 3.5 years over his alleged embezzlement from the Yves Rocher cosmetics company and the Multifunctional Processing Company (MPC). The court decided to keep Alexei Navalny under house arrest until the suspended sentence comes into effect. His brother Oleg was sentenced to a real prison term of the same length.

On the evening of 30 December following sentencing, Navalny was detained for breaking his house arrest as he attempted to join a protest rally at Manezhnaya square, downtown Moscow. The Federal Penitentiary Service has filed a complaint regarding the violation to the Zamoskvorechye court in Moscow. The court has sent it back on December 31 citing the Criminal Code.

Moscow Advises US to Not Politicize Criminal Cases on Navalny: Moscow

Moscow Advises US to Not Politicize Criminal Cases on Navalny