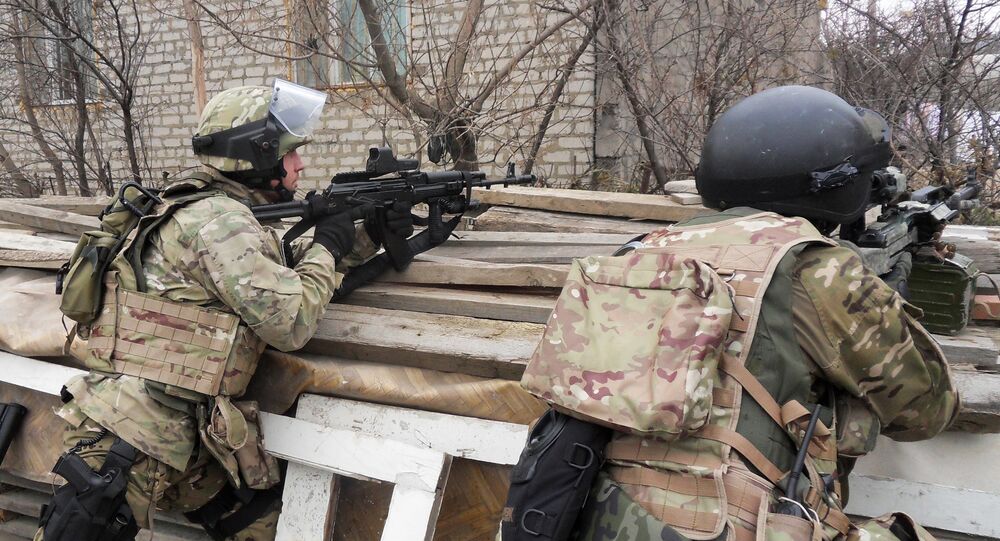 According to the republic's head Ramzan Kadyrov, security forces have eliminated a ringleader of a bandit group and his accomplice. Several policemen were slightly injured during the special operation.

Kadyrov stated that "in course of the special operation, security forces eliminated the ringleader of a bandit group Musa Zavgayev and his accomplice."

The two militants were directly involved in organizing the seizure of the city's Press House and school building in republic's capital Grozny on December 4, the press service of Russia's National Anti-Terrorism Committee (NAK) said in a statement.

© Sputnik / Said Tcarnaev
At Least 7 Police Dead, 18 Injured in Special Operation in Chechnya: Source
"Two militants of Tagilov's gang were identified among those eliminated… The gang repeatedly committed terrorism-related crimes and was directly involved in organizing the seizure of the city's Press House and school building in Grozny on December 4, 2014," the statement reads.

The republic's head also said that the operation was planned in a week. Kadyrov personally supervised the preparation for the operation.

Ramzan Kadyrov said that the gang leader was possibly preparing a series of terror attacks.

"There is credible information that Zavgayev was preparing a series of terror attacks," the Chechen head wrote on his Instagram web page.

Several policemen were slightly injured during the raid, the representatives of law enforcement agencies told RIA Novosti. Investigative activities are being conducted at the site of the special operation.

On December 4, three cars with armed militants attacked a road patrol station in Grozny. The attackers then found shelter in the city's Press House. The operation to repel the attack killed at least 14 law enforcement officers and injured 36, according to Ramzan Kadyrov. A total of 11 militants are reported to have been killed in the operation. The Islamic fundamentalist group Imarat Kavkaz (Caucasus Emirate) has claimed responsibility for the raid.