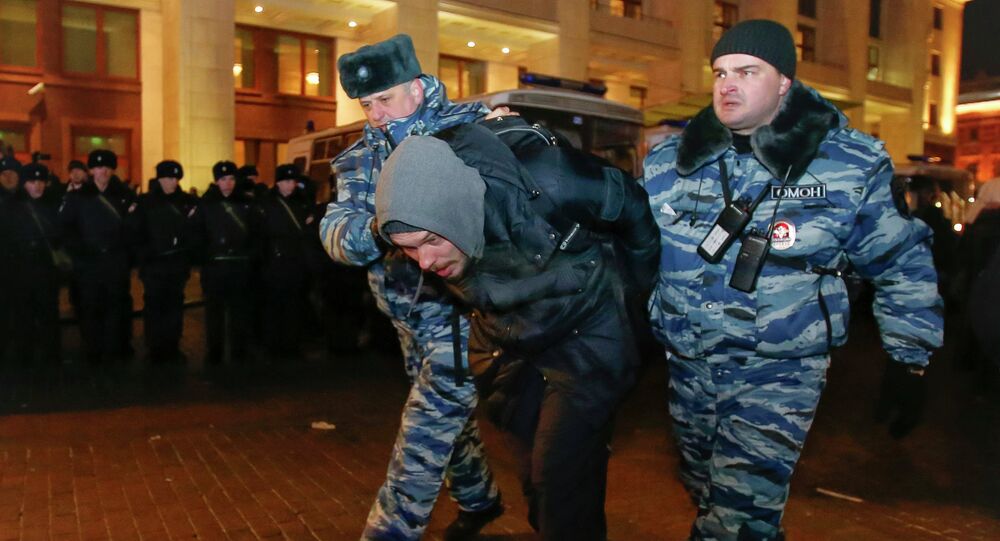 At Least 100 Detained After Disorderly Conduct in Moscow Protests: Police

Moscow police department reported that close upon 100 people have been detained in Moscow in an unauthorized protest campaign.

MOSCOW, December 30 (Sputnik) – Close upon 100 people have been detained in Moscow in an unauthorized protest campaign that gathered nearly 1,500 people at the Manezhnaya Square, Moscow police department said Tuesday.

© Flickr / NCinDC
Navalny Verdict Aims to Deter Political Activism in Russia: US State Dept.
“On Tuesday evening, about 1,500 people gathered around Manezhnaya Square to take part in an unauthorized action. There were also groups of people across the area, opposed to the campaigners,” the police press service said, adding that the city police had repeatedly urged the participants not to disturb the public peace. According to the press service, about 100 people have been detained and brought to the police stations.

RIA Novosti reported that the protesters were pushed away from the Manezhnaya Square, but several dozens are still remaining around the State Historical Museum building on the Red Square.

The protests broke out following Moscow court’s verdict for Russian opposition leader Alexei Navalny and his brother Oleg over their alleged embezzlement from the Yves Rocher cosmetics company. Alexei faced a suspended sentence of 3.5 years, while Oleg was sentenced to a real prison term of 3.5 years.

Alexei Navalny was detained earlier on Tuesday by the police, as he was going to join a protest rally after breaking the house arrest.