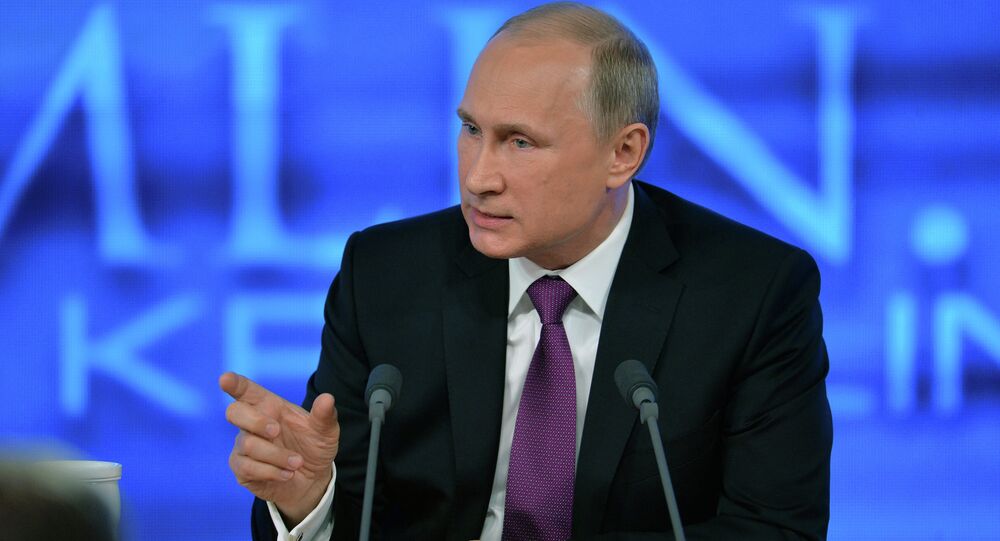 The current economic slowdown is closely tied with backlogs of the Russian government, President Putin stresses. The efforts taken to restructure the economy have been insufficient.

© Sputnik / Maxim Zmeyev
Putin: Questions Remain on Whether Government Reacted to Challenges Timely
MOSCOW, December 25 (Sputnik) – The difficulties in Russia’s economy are not only because of outside factors, including sanctions, but also because the government has not worked out some defects, Russian President Vladimir Putin said Thursday.

“The difficulties that we have run into carry not only an outside factor. They are not solely tied to some sorts of limitations of sanctions or limitations tied with the objective international environment, they are tied to our not working out defects that have accumulated over the years,” Putin said during a government meeting in Moscow.

© Sputnik / Dmitry Astakhov
Russian Gov't Needs to Take Agressive Approach to Economy to Limit Recession
Putin said the government has taken efforts in order to change the structure of the economy in order to give it a more innovative nature, but said the efforts were below the needed measures.

“Much has been done in this but the latest events have shown that this is insufficient,” Putin added.

Russia is currently facing an economic slowdown, with dramatic fluctuations seen recently in the value of the Russian ruble against the US dollar and the euro.

© Sputnik / Ilya Pitalev
Rate Hike by Russia’s Central Bank May Deepen Recession in 2015: BofA Merrill Lynch
The weakening of the Russian national currency is attributed to low oil prices. The sale of oil accounts for a significant part of Russian budget revenues. Economic sanctions imposed on Moscow by the West in the wake of the Ukrainian crisis are also cited among the reasons for the economic slump.

During a December 18 televised press conference, the Russian president said that the country's economic situation could begin to improve in the first quarter of 2015, with Russia's economy recovering completely over the next few years.

Medvedev: Russian Offshores Will Be Denied Access to State Tenders