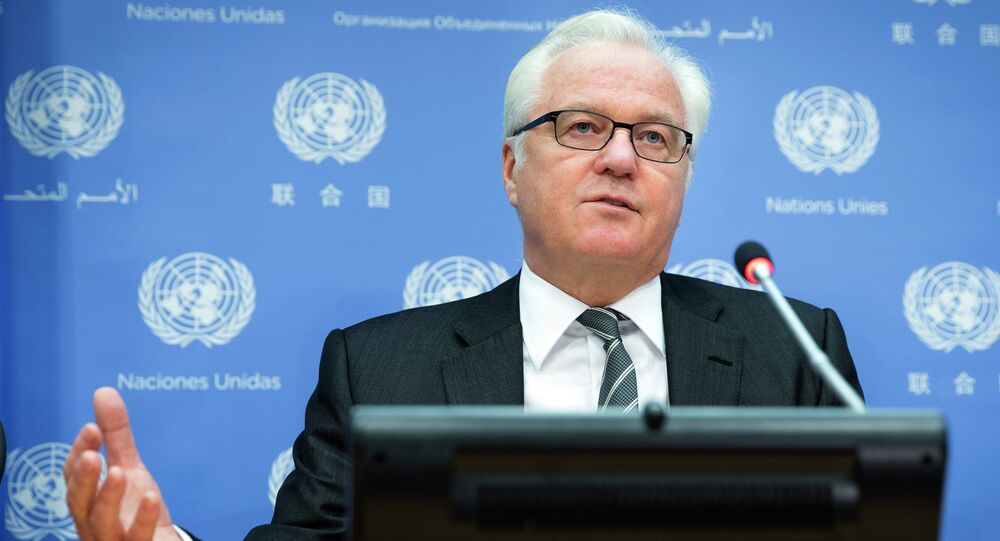 The Russian Permanent Representative to the UN has no doubt that the CIA tortures will be on the UN Human Rights Council's agenda. By contrast, the Ukrainian crisis is losing the UN Security Council's attention without any clear agreement reached.

© Flickr / Val Kerry
US Silent on Psychologists Role in CIA’s Tortures: Doctors
MOSCOW, December 20 (Sputnik) – The US torture practices may be brought to discussion at the UN Human Rights Council (UNHRC), Russian Permanent Representative to the UN Vitaly Churkin said.

“I am sure it will be raised, because we have [UN] Convention Against Torture, and a special rapporteur,” Churkin told reporters Friday.

The Russian diplomat added that the UNHRC has a unique mechanism ensuring that all UN members agree to conduct a comprehensive review of human rights records in their countries.

On December 9, the US Senate Select Committee on Intelligence issued an executive summary of the report, featuring investigation details into the CIA interrogation techniques applied to alleged al-Qaeda members. The report describes a wide range of CIA torture practices, such as waterboarding, mock executions, prolonged sleep deprivation, threat of sexual abuse, threats against family and other tactics.

© Fotobank.ru/Getty Images
European Commission Calls on EU Members to Investigate CIA Torture
The revelation of abusive practices has caused international outrage, with the right groups, including UN experts, calling for prosecution of those responsible for the abusive practices. However, US President Barack Obama and the US Department of Justice found that the CIA officers who had carried out interrogations should not be prosecuted, according to the White House spokesperson.

"Of course the year [2014] was difficult because of the situation in Ukraine. [UNSC had] 26 meetings and nothing practical was clearly decided, two of our projects were instantly blocked by our Western partners," Churkin told reporters in New York while summing up the year's highlights.

© Sputnik / Vitaliy Belousov
Kiev, East Ukraine Republics Fail to Set Date of Next Reconciliation Talks
According to Churkin, Russia's Western partners "are for some reason" not planning further meetings.

Meanwhile, the Ukraine-Russia-Organization for Security and Co-operation in Europe (OSCE) trilateral Contact Group on the settlement of the situation in Ukraine was to hold a meeting on December 12, but it was put off to allow for further preparation.

© AP Photo / Geert Vanden Wijngaert
Majority of EU Citizens Against Additional Financial Aid to Ukraine: Poll
In mid-April, Kiev authorities launched a military operation against independence supporters in Ukraine's southeastern regions. Some 3,700 people have been killed and more than 9,000 have sustained injuries since the beginning of the armed conflict, according to UN data.

The West has been accusing Russia of meddling in Kiev's internal affairs and aiding independence fighters in southeastern Ukraine. These claims have not been supported with any evidence.

Europeans Oppose Aid to Ukraine As EU Grapples With Own Problems: Lawmaker