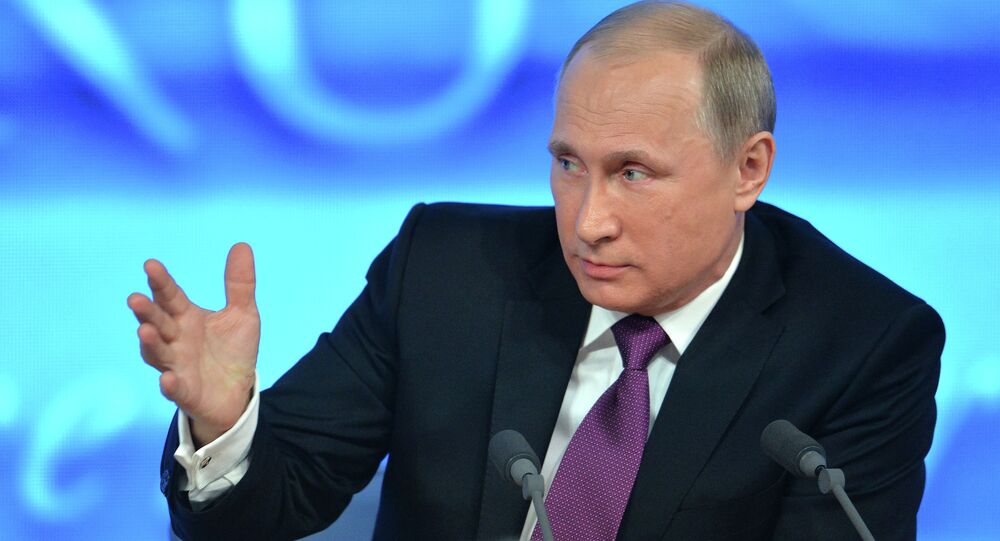 "The fine line between the opposition and the 'fifth column' is internal and it's difficult to notice from the outside … An opposition figure, even if he's very harsh, in the end he fights for the interests of his motherland, but the 'fifth column' represents people who fulfill what is dictated to them in the interests of another government and they are used as an instrument to reach political goals that are foreign to us," Putin said.

The term "fifth column," commonly used to refer to a group of people who undermine a group in power by infiltrating and posing as members of the group in power, was first used by the president in his address to the Federal Assembly after the referendum in Crimea in March. Since then, the term has been used to refer to opponents of the Russian government.

© Sputnik / Ramil Sytdikhov
Khodorkovsky to European Parliament: Anti-Russian Sanctions 'Huge Mistake'
President Putin assured journalists that the Russian government did not, and had no intention to, persecute or to defame those who oppose its policies.

"I would like to assure you that there is no organization or any sort of 'poisoning' of people who don't agree with our actions, for example in Ukraine, Crimea, or any other external issues, no one from the official government organs do this," Putin said.

In his comments Putin was generally referring to the alleged persecution and defamation of several opposition activists in Russia, such as the popular rock musician Andrei Makarevich. Makarevich, the founder of the Mashina Vremeni (Time Machine) rock band, has faced public criticism after his increased participation in opposition rallies and his anti-government remarks.

Khodorkovsky Has Right to Engage in Politics

© Sputnik / Vasily Prokopenko
Khodorkovsky Contradicts US When Commenting on Crimea’s Reunion With Russia
Former Yukos CEO Mikhail Khodorkovsky, sentenced to ten years in prison for fraud and tax evasion and pardoned for 'humanitarian reasons' has a right to engage in politics and is eligible to run for senior positions, President Putin said.

According to the Russian leader, he decided to pardon Khodorkovsky for "humanitarian reasons" in order to give him a possibility to say good-bye to his terminally ill mother. Commenting on the president's words, Khodorkovsky tweeted that he views Putin as a political opponent and not as an enemy.

Billionaire Yevtushenkov is Not Another Khodorkovsky

Charges leveled against Russian billionaire Vladimir Yevtushenkov are unsubstantiated, as the investigators failed to prove the chairman and co-owner of the Russian oil-telecoms-retail conglomerate AFK Sistema was guilty of money laundering and assisting in the legalization of the formerly state-owned Bashneft oil company.

© Sputnik / Alexei Druzhinin
Russian Billionaire Yevtushenkov Freed From House Arrest: Lawyer
"Investigators failed to prove this fact, so this group of charges against him was lifted," the Russian leader said.

Sistema's 2009 acquisition of shares in Russia's Bashkortostan Republic oil company Bashneft came under investigation by the Prosecutor General. There was suspicion that those shares were bought with an unlawful "discount" of $500 million, as the shares' prices were reduced intentionally. Sistema has repeatedly denied the allegations.

The Russian business community responded to the arrest with sharp criticism, saying the measure was excessive and harmed the business climate in the country. Civil society claimed the arrest was very similar to Khodorkovsky"s and that the Bashneft case was reminiscent of of the Yukos case.

In September, Khodorkovsky stated that Yevtushenkov had been arrested because he would not accept the conditions offered to him by Rosneft, when the company expressed its interest in acquiring Bashneft.

"Vladimir Yevtushenkov… did not want to pass the property on the terms he was apparently offered. Well, it was decided to act in a well-known manner," the former head of Yukos said.

On December 17, Yevtushenkov's lawyer announced that the businessman had been released from house arrest under personal guarantee.

Putin, mentioned that he had invited Yevtushenkov to his upcoming annual meeting with Russian business leaders.

The Russian leader was asked about "palace coups." He stated that Russian government officials had no palaces, so a "palace coup" was not possible.

"Our official residence is the Kremlin, it is well-protected, and this is also a factor of our state's stability," Putin said.

Russian stability, President Putin stated, is based in the vigorous support of the Russian people.