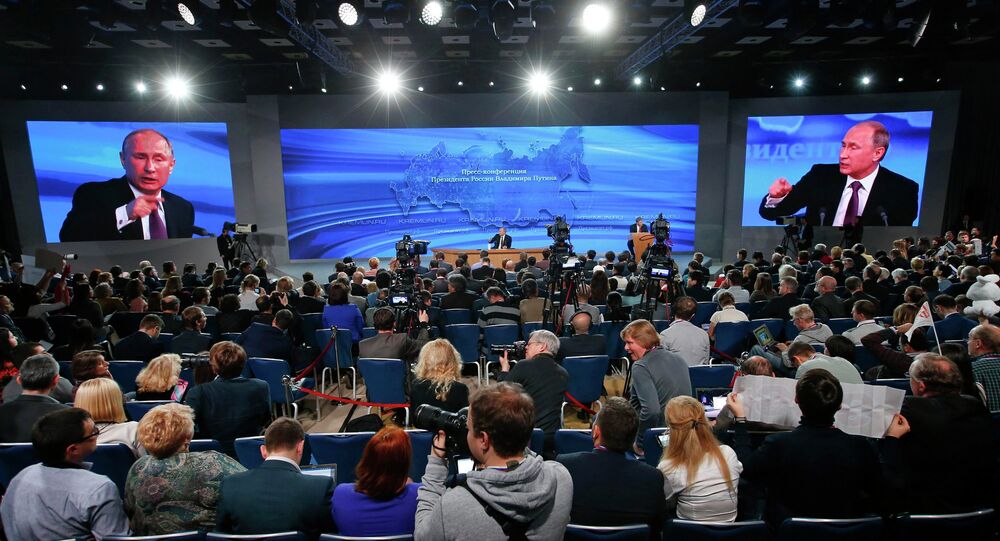 During his annual press conference Russian President Vladimir Putin said that there is a fine line between the political opposition and the so-called fifth column in that the latter operates in the interests of a foreign government.

© Sputnik / Ilya Pitalev
Live Report: Putin’s Annual Big Press Conference
MOSCOW, December 18 (Sputnik) – Russian President Vladimir Putin said there is a fine line between the political opposition and the so-called fifth column in that the latter operates in the interests of a foreign government.

“The fine line between the opposition and the ‘fifth column’ is internal and it’s difficult to notice from the outside…An opposition figure, even if he’s very harsh, in the end he fights for the interests of his motherland, but the ‘fifth column’ represents people who fulfill what is dictated to them in the interests of another government and they are used as an instrument to reach political goals that are foreign to us,” Putin said.

The president first used the term "fifth column" in an address to the Federal Assembly after the referendum in Crimea in March. Since then, the term has been used to refer to the opponents of the Russian government.

Nevertheless, the president said he did not feel personal responsibility for reviving the term.

The fifth column is commonly used to refer to a group of people who undermine a group in power, a government, for example. The term originates from the times of the Spanish Civil War (1936-1939). It was first used by Spanish nationalist Emilio Mola Vidal to refer to his supporters in Madrid who were fighting the government.

Russian Government Does Not Persecute People Who Oppose Its Policies

The Russian government does not persecute people who are against its policies, Russian President Vladimir Putin stressed.

“I would like to assure you that there is no organization or any sort of persecuting people who don’t agree with our actions, for example in Ukraine, Crimea, or any other external issues, no one from the official government organs do this,” Putin said.

In his comments Putin was generally referring to the alleged persecution and defamation of several opposition activists in Russia, such as the popular rock musician Andrei Makarevich.

Makarevich, the founder of the Mashina Vremeni (Time Machine) rock band, has faced public criticism after his increased participation in opposition rallies and his anti-government remarks.

There are no threats of a “caste overthrow” of the government in Russia, Russian President Vladimir Putin said Thursday during his annual year-end press conference.

“In regard to a ‘caste overthrow,’ then calm down. We don’t have castes, so a ‘caste’ overthrow is impossible,” Putin said when responding to a reporter’s question whether a ”caste overthrow” in Russia was possible.

“We have the official residence – the Kremlin, and it is well protected, which is another factor of our state stability,” Putin added.

© Sputnik / Alexei Druzhinin
Over 80% of Russians Back Putin Despite Economic Turmoil: Poll
Russian leader said, however, that the main stability factor is Russian citizens' support.

“I think you will not argue with me about the fact that in regard to the main directions of our foreign policy, and the internal one, there is such support. Because people feel that we, and I in particular, act in the interests of the majority of Russian citizens,” Putin explained.

According to the recent poll published on Thursday by the Associated Press (AP) and NORC Center for Public Affairs Research, the approval rating of Russian President Vladimir Putin has surged to 81 percent, a sharp increase from the 58 percent he received at the beginning of his third term.