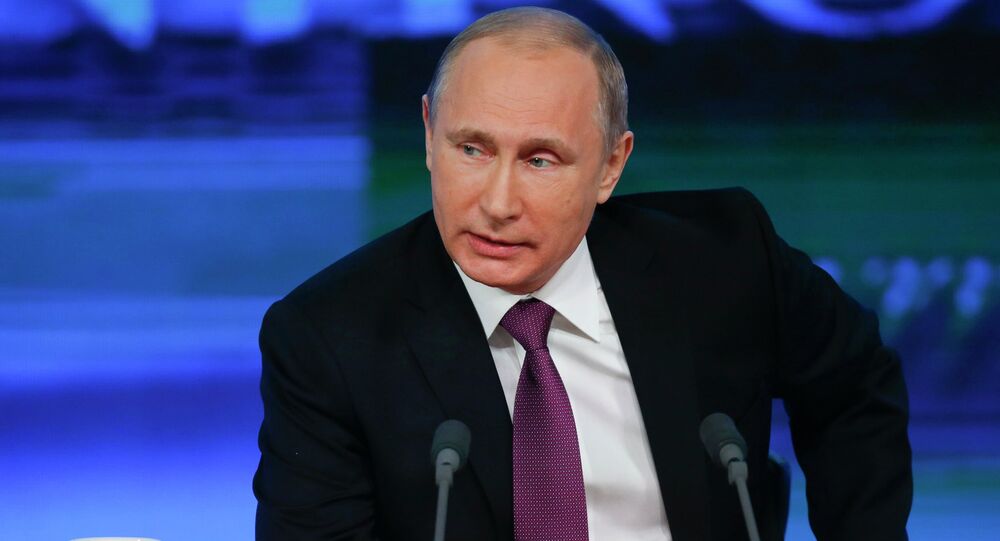 Putin: Western Partners Consider Themselves Empire, See Others as Vassals

Russian President Vladimir Putin said that western partners consider themselves an empire and see others as their vassals who must be opressed.

© Sputnik / Ilya Pitalev
Live Report: Putin’s Annual Big Press Conference
MOSCOW, December 18 (Sputnik) — During his annual press conference Russian President Vladimir Putin said that western partners consider themselves an empire and see others as their vassals who must be opressed.

Regarding the relations between the West and Russia, Putin said: "They [the West] will always try to chain the bear".

“No matter what we do, we are always met with problems, opposition, and fights with us…Do you think that if our bear sits quietly and stops chasing piglets around the taiga, then they’ll leave him alone? They won’t. They will always try to put [the bear] on a chain,” Putin said.

© Sputnik / Michail Fomichev
West Seeks to Diminish Russia’s Defense Potential: General Staff Chief
“This is the main problem of modern international relations is that our partners refuse to stop, they think they had won, they consider themselves to be an empire and that others are vassals who must be oppressed,” he told reporters at a news conference.

Relations between Russia and the West worsened amid the escalation of the Ukrainian crisis. Russia’s Western partners kept blaming Moscow for meddling in Ukraine’s internal affairs – a claim that Kremlin has repeatedly denied. In response to what the West called Russia’s aggressive policy toward Ukraine, the United States, the European Union and their allies have imposed several rounds of sanctions against Moscow, which Kremlin has called “illegal”.

Moscow criticized its Western partners for their one-sided view on the Ukrainian crisis, urging the United States and European Union to take into account the interests of all parties involved, including citizens of the southeastern regions of Ukraine, instead of blindly supporting every move the Kiev authorities make.

© AP Photo / Mindaugas Kulbis
NATO Justifies Military Buildup Near Russia by 'Fairy Tales': Russian General Staff
In July, Putin stressed that Russia’s Western partners have spent a lot of time trying to convince Moscow of their good intentions and readiness to jointly build a strategic partnership, but, in fact, they have increased excessive NATO military presence close to Russia's borders.

Moscow has repeatedly said that it was important to establish a multipolar system of international relations, based on respect for mutual interests and effective work, which would benefit the entire international community.

NATO suspended all military cooperation with Moscow following Crimea's reunification with Russia in March. The alliance has since blamed Russia for interfering in the conflict in Ukraine's southeast by sending troops and military equipment.

Moscow has repeatedly denied any involvement in Ukraine's internal affairs and urged the conflicting sides to engage in dialogue in order to find a peaceful resolution to the conflict.

Putin: Questions Remain on Whether Government Reacted to Challenges Timely