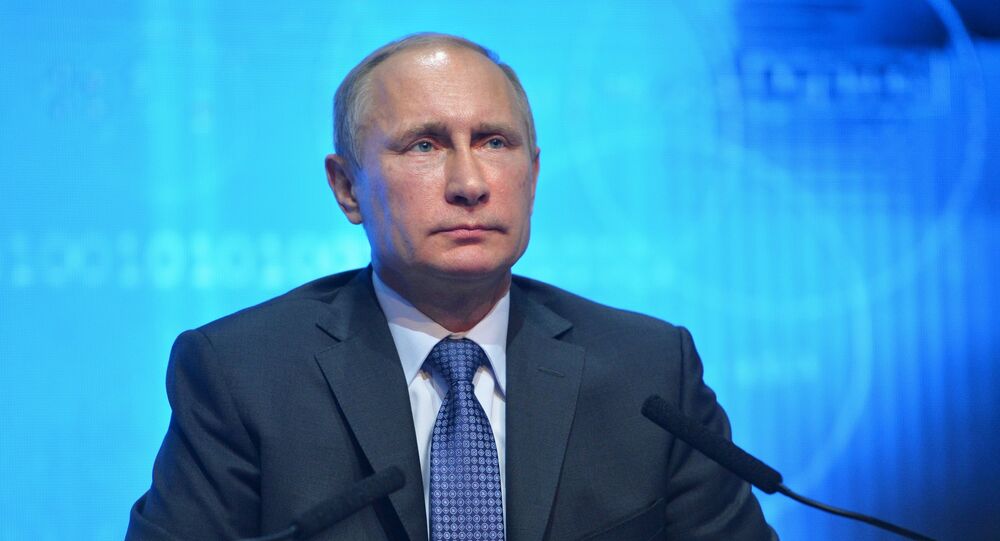 Despite the volatile economy and sanctions, Russians' support of President Putin has considerably surged since 2012. Two-thirds believe Russia is moving “in the right direction” in international relations.

© Sputnik / Alexey Filippov
Putin to Discuss Economy, International Relations at Big End-of-Year Press Conference on December 18
MOSCOW, December 18 (Sputnik) — Despite the economic downturn in the country, the approval rating of Russian President Vladimir Putin has surged to 81 percent, an increase from the 58 percent he received at the beginning of his third term, a poll released Thursday by the Associated Press (AP) and NORC Center for Public Affairs Research revealed.

The AP-NORC Center survey, conducted from November 22 to December 7, is based on more than 2,000 in-person interviews of Russians aged 18 and above.

The poll showed that only 6 percent of respondents were critical of how the president handled his job. Putin’s approval rating differed between Moscow residents and those living elsewhere in the country. The residents of Moscow turned out to be 10 percent less approving of the president’s domestic and foreign policies compared to the whopping 82 percent among residents elsewhere.

When asked about the most pressing issues facing Russia, respondents cited the country's volatile economy and the standoff over Ukraine most frequently.

© Sputnik / Sergei Guneev
Activists Compare Putin's Policy to JFK's Peacemaking Efforts in Open Letter of Support
The study found that economic woes, such as the slide in the ruble’s value against the dollar, surging prices of goods and the fallout over western economic sanctions, concerned russians the most, with nearly two-thirds saying Western restrictions weighed heavily on the national economy. Only seven percent said the sanctions, imposed on Russia by the United States, Europe and some other countries, had a positive effect.

Despite this, more than a half of those surveyed claimed the sanctions had no effect on their personal pocketbooks, and most of them expressed certitude that the economy and their personal finances will "stay the same or improve over the next three years.”

On the foreign agenda, around two-thirds said Russia was going “in the right direction”, with only 20 percent describing the current course of the national policy as “wrong.” The younger generation of adults aged 18 to 34 were on average more positive about the country’s future.

© Sputnik / Anton Denisov
Putin New Year Address Location to Remain Secret Until December 31: Kremlin
Speaking about Putin’s handling of the Ukrainian crisis, almost eight in 10 respondents expressed approval. Only six percent were unhappy about Russia’s stance toward the turmoil in the neighboring country and two-thirds said they would support Ukrainians that want to break off from Ukraine, with one in four undecided, and nine percent disapproving of such a move.

Putin will address these and other matters during the much-anticipated end-of-year press conference scheduled for Thursday noon Moscow time (09:00 GMT). The Q&A session is expected to last for several hours.