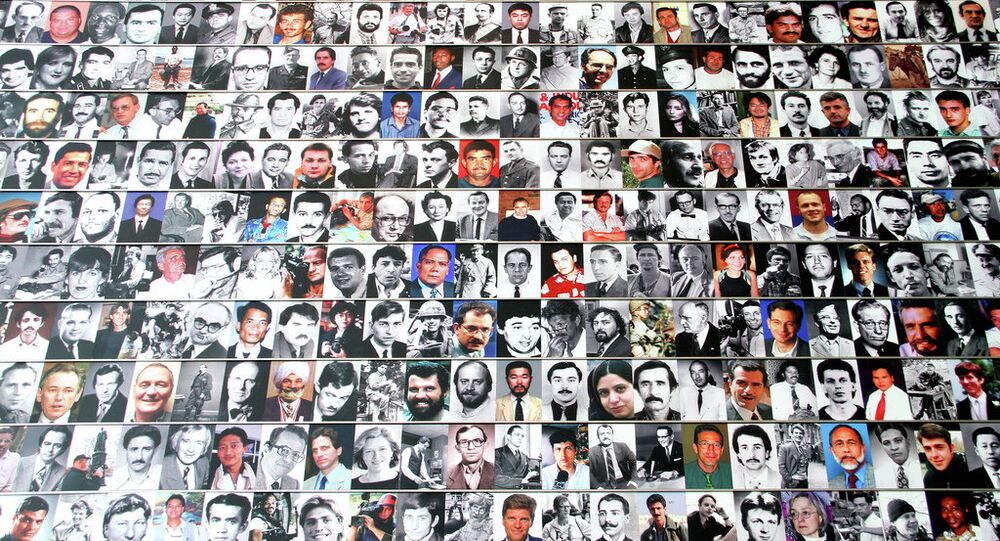 Remembrance Day of Journalists Killed in the Line of Duty is commemorated in Russia on December 15.

© Sputnik / Evgeny Biyatov
Russian Reporters Deaths in Ukraine Need Investigation: EJF
MOSCOW, December 15 (Sputnik) — On December 15, the Remembrance Day of Journalists Killed in the Line of Duty is marked in the Russian Federation.

The first Remembrance Day was observed on December 11, 1991, when relatives and colleagues of fallen journalists gathered to honor the memory of those who gave their lives for freedom of speech. It followed the killing of Russian TV correspondent Viktor Nogin and cameraman Gennady Kurennoy in Yugoslavia in September 1991. An investigation revealed that their car came under fire from Serbian fighters.

In recent years, the day has been observed on December 15. Its purpose is to remind everyone of journalists' immense contribution to society and the dangers associated with their profession, which has always been among the most perilous, both in times of war and peace.

In 2013, according to the Committee to Protect Journalists (CPJ), 70 journalists lost their lives worldwide as a result of their work or in the line of duty. Syria was the deadliest place in the world for journalists that year, with 29 lives lost. It was followed by Iraq and Egypt, where ten and six journalists died, respectively. Among the most dangerous places for journalists were Pakistan, Somalia, India, Brazil, the Philippines, and Russia.

According to the CPJ, as of December 10, 2014, 44 journalists had lost their lives in the line of duty across the world, including 10 people in Syria, five in Ukraine and Iraq each, and four in Israel. Pakistan, Paraguay, Brazil, and Afghanistan also figured among the most dangerous countries for journalists as well.

In July 2014, the International News Safety Institute (INSI) named Ukraine as the most dangerous country for journalists in the first six months of 2014.

The following Russian journalists were killed in the line of duty in Ukraine's southeast: Rossiya Segodnya photojournalist Andrei Stenin, Channel One cameraman Anatoly Klyan, Rossiya 1 correspondent Igor Kornelyuk and sound engineer Anton Voloshin. All of them were posthumously awarded the Order of Courage, a state honor bestowed by the Russian Federation.

The names of Russian journalists Vladislav Listyev, Dmitry Kholodov, Larisa Yudina, Anna Politkovskaya, Natalia Estemirova, Anastasia Baburova, and many others who died at the hands of criminals will also never be forgotten.

The death of journalist and publisher Artyom Borovik has yet to be fully investigated. There have been many awards established by the editorial boards of various media outlets to commemorate Russian journalists who sacrificed their lives for freedom of speech.

Internationally, journalists killed in the line of duty are honored on World Press Freedom Day marked on May 3. The celebration of Press Freedom Day is timed to coincide with the presentation of the Guillermo Cano Prize, established by the United Nations Educational, Scientific and Cultural Organization (UNESCO) Executive Board in honor of the Colombian journalist and editor. The prize is awarded annually to an individual or organization that has made an important contribution to the protection and promotion of press freedom anywhere in the world.

Many countries also observe the International Day of Journalist Solidarity on September 8 in memory of the prominent Czech journalist Julius Fucik, who was killed during World War II. The day is marked by conferences and conventions held worldwide in order to bring together journalists from different countries and to give them an opportunity to share experiences and receive awards for the often dangerous work they do.