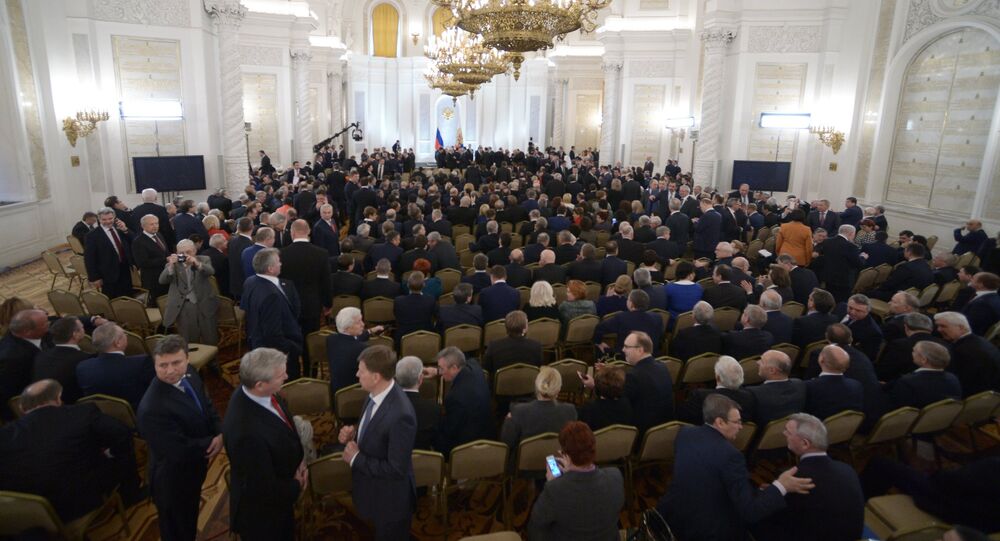 Putin: Under No Circumstances Will Moscow Stop Cooperating With Europe, US

Russia seeks to have as many reliable partners around the globe as possible, President Vladimir Putin said during annual address to the Federal Assembly, adding that Moscow will never sever ties with Europe and the US.

© Sputnik / Aleksey Nikolskyi
Highlights of Vladimir Putin's Annual Address to Federal Assembly
MOSCOW, December 4 (Sputnik) – During his annual address to the Federal Assembly, Russian President Vladimir Putin stated that Moscow seeks to have as many reliable partners as possible, both in the West and the East, and will never sever ties with Europe and the United States.

"Under no circumstances are we going to scale back our ties with Europe and the US. At the same time we will revive and expand traditional ties with the south of the American continent, we will continue to cooperate with Africa, with countries in the Middle East," Putin said.

Putin reiterated that Russia aims to have as many reliable partners as possible, both in the West and in the East, stressing that many of the world’s economic powerhouses are Russia’s "true friends and strategic partners". He added that Russia is open to the world and would never choose self-isolation, for that would be a sign of weakness, whereas Russia is strong and confident.

© Sputnik / Aleksey Nikolskyi
Putin: US Creating Strategic Missile Shield Not Only Threatens Russia, EU, But US Itself
Putin also stressed that Moscow "will continue to stand up for global diversity … so that everyone sees the true, undistorted image of Russia."

The first address was made by Boris Yeltsin on February 24, 1994. This year, this tradition celebrates its 20th anniversary.