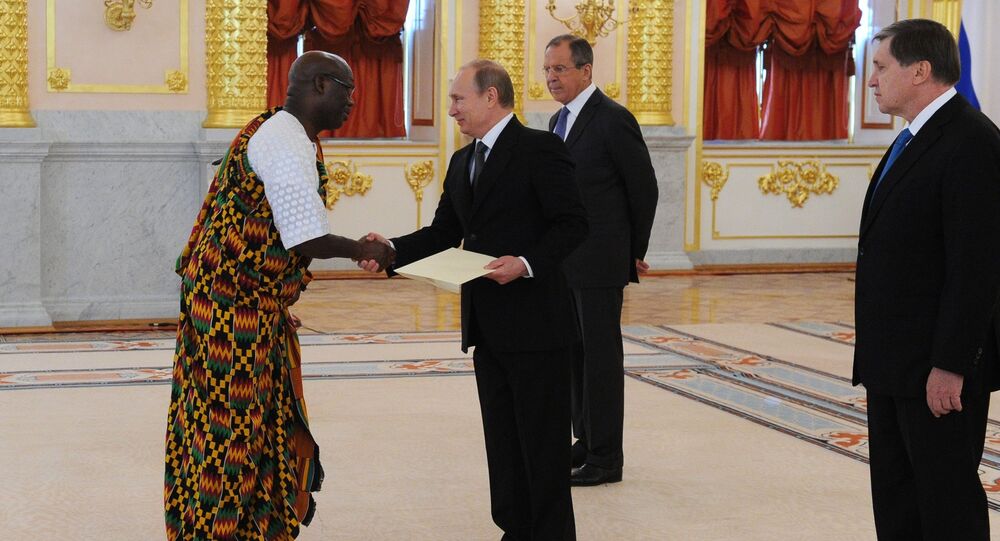 Russian President Vladimir Putin handed out letters of credence to 15 newly appointed ambassadors during a diplomatic accreditation ceremony in Kremlin.

"I would like to sincerely wish you every success and express a hope that your work here will facilitate the development of bilateral relations and mutual cooperation in various areas between Russia and the countries you represent," Putin said.

"Heads of 15 diplomatic missions are here today and, as we traditionally do, I would like to briefly characterize the state of relations with every state which you represent," the president stated.

With Djibouti, Russia is interested in developing ties and cooperating to reinforce peace and stability in the Horn of Africa, he said.

Russia "appreciates the friendly ties" it has with the Central African Republic and will continue supporting efforts to solve the difficult political and humanitarian situation in the country.

With Eritrea, Russia is united by "similar approaches to pressing issues on the international and regional agenda" and "commitment to reinforcing trade and economic ties", Putin stated.

Addressing Poland, the Russian president noted a "long common history" and underlined that any issues could be resolved "if we act on the basis of mutual respect and take a pragmatic approach".

Russia maintains friendly relations with neighboring Democratic People's Republic of Korea and "further deepening of political ties and trade and economic cooperation" is in the interests of both countries, Putin said.

According to the president, the dialogue between Russia and Ghana has always been constructive and Moscow intends to "continue to coordinate our approaches in the United Nations and at other international forums" and "support specialist training for various industries in Ghana".

Vietnam and Russia are united by "long-standing traditions of friendship and cooperation" and are set to deepen their collaboration, especially in the fuel and energy sector. A free-trade agreement between Vietnam and the Eurasian Customs Union is also underway, Putin said.

"We believe that Russia and the United States bear a special responsibility for maintaining international security and stability, for counteracting global challenges and threats," the Russian president stated. "We are ready for practical cooperation with our American partners in various areas on the principles of mutual respect, equal rights and non-interference in domestic affairs," he added.

Russia and Zambia recently celebrated the 50th anniversary of the establishment of diplomatic ties and will continue to coordinate their approaches to issues on the regional and international agenda. Russia is "interested in further intensification of our bilateral cooperation", Putin said.

With Turkey, relations have reached a "qualitatively new level and a number of areas, particularly in the energy sphere, are of truly strategic importance".

The president stressed Russia's commitment to develop ties with Tanzania and welcomed "the active role Tanzania plays in addressing the problems on the African continent".

"We view Hungary as one of the most important political, trade and economic partners of Russia," Putin said, adding that Russia shares the Hungarian government's commitment to "build up a constructive dialogue" and implement "wide-scale investment projects that have been planned".

Addressing Russia's relations with Peru, the president said the countries share "friendly ties, mutual understanding and confidence" and noted that the recent visit of President Ollanta Humala to Russia gave a "significant impetus to developing the cooperation".

Relations between Russia and Nicaragua are based on "time-tested friendly ties and mutual affection" and Russia appreciates President Daniel Ortega's "personal contribution to the development of our bilateral ties".

"This year we celebrated a landmark event in relations between Russia and Uzbekistan. It was the 10th anniversary of the signing of the agreement on strategic partnership," Putin said, noting that the two countries have achieved important results in "practically every area of our bilateral cooperation".

The president stated that "Russia highly appreciates the friendly ties with every [one] of the states that you represent. We are committed to making your work in Moscow as efficient and productive as possible". The new ambassadors can always count on the help and support of Russian leaders and agencies, he stressed.

US Ambassador to Russia Receives Diplomatic Accreditation in Kremlin

Ukraine to Send Ambassador Back to Russia in Case Relations Improve: FM