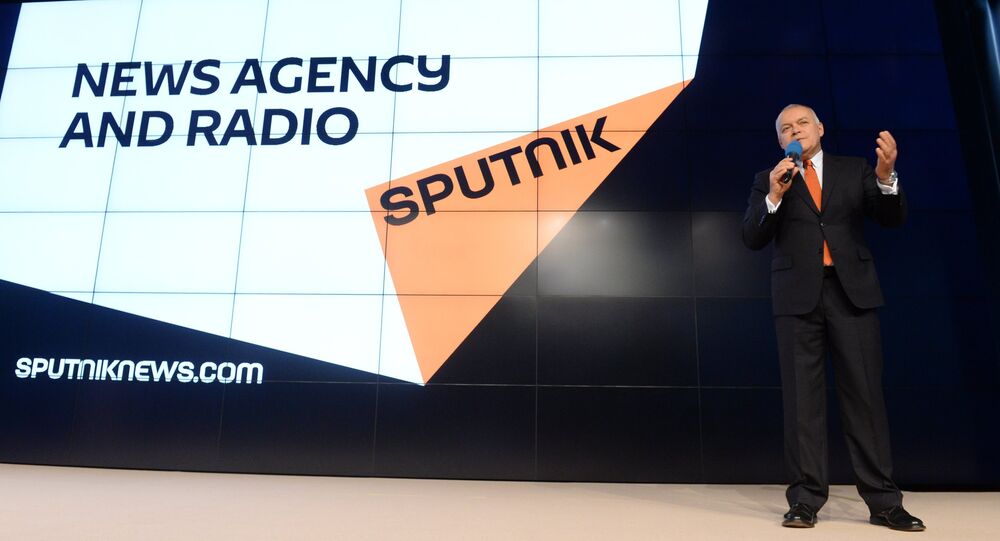 Sputnik, a major new media brand with modern multimedia centers in dozens of countries, will go live November 10. All of Sputnik’s multimedia centers located in major world capitals will maintain their own websites and broadcast from local radio stations.

MOSCOW, November 10 (Sputnik) — In 2015, Sputnik will broadcast in 30 languages, with over 800 hours of radio programming a day, covering over 130 cities and 34 countries. Sputnik’s exclusive content is designed for a global audience of billions who are tired of aggressive propaganda promoting a unipolar world and want a different perspective.

The flagship site is www.sputniknews.com.

Sputnik for the world

Offering a fuller picture of the world with a truly diverse range of views, Sputnik tells the untold.

"There are countries that impose their will on both the West and East," Director General of Rossiya Segodnya International Information Agency Dmitry Kiselev said. "Wherever they intervene, bloodshed, civil wars and color revolutions ensue. Entire countries fall apart. Iraq, Libya, Georgia, Ukraine, Syria, to name just a few. Many people already understand that the world doesn't necessarily have to believe that the actions of the United States work for everybody. Russia proposes a model for the world that is based on respect for all of humanity. We believe in a diverse, multicultural world, and we have many allies. To promote this outlook our media group is launching a new global brand, Sputnik."

Sputnik points the way to a multipolar world that respects every country's national interests, culture, history and traditions.

"In this world, Japan is Japanese, Turkey is Turkish, China is Chinese and Russia is Russian," Kiselev said. "We are not suggesting that other nations should adopt the Russian way of life. We believe everyone is entitled to live in their own way. Our outlook on the world is rooted in international law. The ongoing evolution of international relations is good for us and good for humankind. We are not an opposition media outlet in the countries where we operate. We maintain good relations with everybody."

"The agency has overhauled the underlying concept of its work," Kiselev said. "Previously all radio stations in foreign languages were based in Moscow, but almost all of our radio programs and websites will be developed locally."

"It is absolutely clear to us that trying to broadcast in foreign languages and win over foreign audiences from Moscow is not a productive approach," Rossiya Segodnya Editor-in-Chief Margarita Simonyan said. "Journalists who work in Moscow are not in a position to understand local realities as well as the locals themselves. Nor will they be able to invite local newsmakers and experts to their studios."

Sputnik is uniquely positioned as a provider of alternative news content and as a radio broadcaster. In every country where it operates, Sputnik has a multimedia center complete with a radio station for local audiences, a website, a news agency that produces exclusive content, and a press center.

"Each multimedia center will work on different projects simultaneously. This can include launching new programs, news, comedy or analysis shows, online polls, or live broadcasts with world experts. Importantly, this unique content can be accessed in different formats by different local audiences," Simonyan said.

Sputnik's radio broadcasting will use modern formats, such as digital DAB/DAB + (Digital Radio Broadcasting), HD-Radio, as well as FM radio, mobile phones and the Internet. In the medium term, the goal is to broadcast around the clock.

"Many countries offered to let us broadcast Sputnik programs using local FM radio stations," Simonyan said. "They are interested in having new content in their media market and will include our programming in their broadcasts. With the advent of this new brand and the improved quality of our programming, we expect the regional Sputnik network in different countries to grow as well."

Webcasting is also rapidly expanding. The goal is to update Sputnik-run websites around the clock and deliver the most important information to target audiences using social media.

Sputnik news feeds in English, Spanish and Arabic are available around the clock. A newscast in Chinese will become available in late 2014. These products are distributed by subscription and cater to professional media and business, as well as expert and government agencies. Regional editorial offices in Washington, Cairo, Beijing and Montevideo work 24/7.

Sputnik's photo service uses a worldwide network of photojournalists. Images will be stored on a single database to allow for rapid sharing between regional centers.

"Sputnik's audience includes billions of people around the world, who, I'm sure, have had enough of the aggressive mainstream propaganda on the air, in newspapers and on television in many countries, sowing discord and trampling international law, common sense, the truth and the facts," Kiselev said. "People are looking for an alternative, and we are offering one by making Sputnik programming available worldwide. The demand is clearly there."

Sputnik — a standard of excellence

Sputnik is delivering a new standard of media excellence.

“It’s a forward thinking, trailblazing media outlet that fills a major void in the global information market. What sets it apart is its choice of topics, perspective and insights,” said Simonyan.