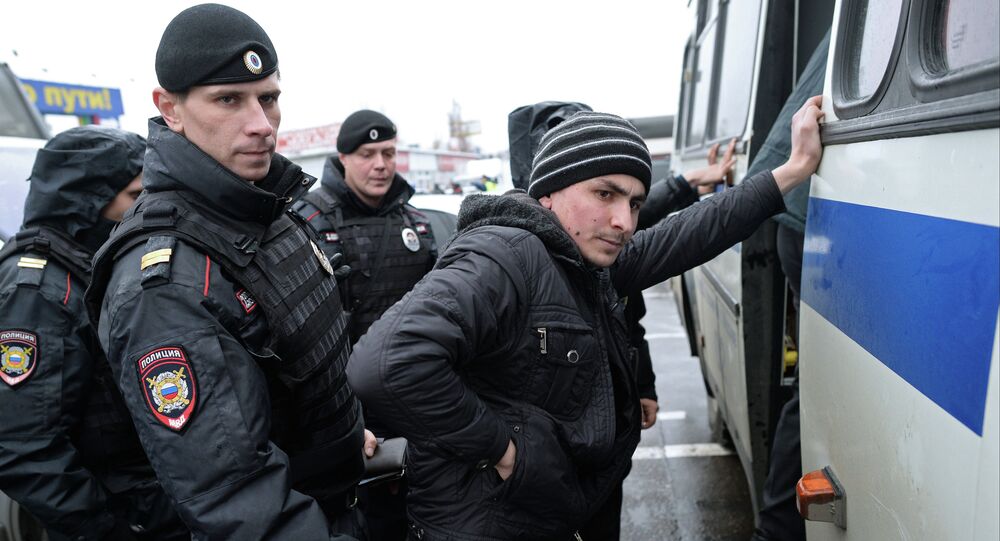 Moscow police are carrying out what they call a "comprehensive preventative operation" meant to combat the city's problems with illegal immigration, the press service of the Ministry of Internal Affairs has said.

MOSCOW, October 28 (RIA Novosti) — 4,500 police officers in the Russian capital are carrying out what they call “a comprehensive preventative operation” aimed at combating the city’s problems with illegal immigration, the press service of the Moscow Police has said.

During the course of the operation, codenamed “Migrant 2014”, police have already checked the identities of over 14,000 migrants, uncovering over 100 crimes, including theft, armed robbery, forged documents, and drug trafficking, and levying others with administrative fines for illegally entering the country, local news sources have said.

Between October 23 and November 2, the police, the Federal Security Service and the Federal Migration Service are teaming up to check over 1,500 areas, including apartments, attics, basements, hotels, dormitories, garages, industrial areas, and markets.

Earlier this year, representatives of the country’s Federal Migration Service noted that as many as a million foreigners could be working illegally in Moscow, far outnumbering the 415,000 legally documented workers.

Officials have voiced the need to change the country’s quota-based system of work permits, which is said to not reflect actual demand. The resulting situation prompts many immigrants to work illegally, with a much smaller group turning to crime.

Over the last decade, Moscow has faced a range of problems as a result of an influx of immigrants looking for work in the capital, most of them from the former Soviet Union. Problems include nationalist unrest, inter-ethnic tensions and growing anti-immigrant sentiment among many local residents. The problem is particularly troubling and painful for Russia, given the fact that many ethnicities have long co-existed in the country alongaside the Slavic Russian majority, including the traditional inhabitants of places like Siberia, Tatarstan and the Caucasus, as well as people with Finno-Ugric ancestry.

The problem of immigration remains a difficult one, due to a drop in the number of people in the workforce, as well as an economic rebound which has occurred over the last 15 years that has resulted in growing demand for migrant labor, especially in the country’s capital.