Russian Foreign Minister Sergei Lavrov said in an interview with a US newspaper published Thursday that homemade sarin nerve agent was used in a chemical weapons attack in Damascus on August 21, an attack that the United States maintains was carried out by the Syrian regime.

MOSCOW, September 26 (RIA Novosti) – Russian Foreign Minister Sergei Lavrov said in an interview with a US newspaper published Thursday that homemade sarin nerve agent was used in a chemical weapons attack in Damascus on August 21, an attack that the United States maintains was carried out by the Syrian regime.

Lavrov gave an interview to The Washington Post on Tuesday after a meeting with his US counterpart John Kerry. Lavrov said he had used the meeting to hand over evidence proving Russia’s contention that chemical weapons were used by Syrian rebel groups in the controversial August 21 attack.

Russia investigated the alleged use of chemical weapons in the Syrian city of Aleppo on March 19 after a request from the Syrian government, Lavrov said, adding that its findings have been “broadly” made available to the United Nations Security Council and the public, The Washington Post reported.

The United States, as well as Britain and France, said last week that a UN report into the use of chemical weapons on August 21 in Damascus confirmed their contentions that it was the work of the Syrian regime, Reuters reported. 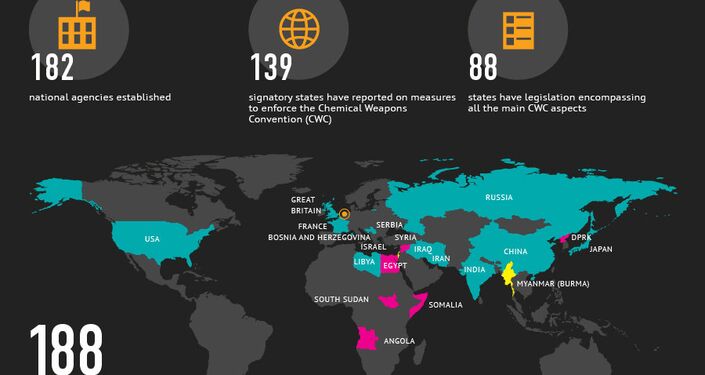 The UN investigation – which did not have a mandate to determine which side was responsible – said that sarin gas was delivered via surface-to-surface rockets during the attack on August 21, which also coincide with meteorological conditions that maximized the spread of the gas, according to Reuters.

Russian Deputy Foreign Minister Sergei Ryabkov said on September 18 that the UN investigation was carried out in the absence of a full understanding of the situation in Syria, and described its conclusions as “politicized, biased and unilateral.”

Lavrov told The Washington Post on Tuesday that the evidence he had presented to Kerry to support Russia’s case that chemical weapons were used by rebel groups on August 21 was “available on the Internet,” and that it included reports from journalists who were told by combatants that “they were given some unusual rockets and ammunition by some foreign country and they didn’t know how to use them.”

The United States claims that 1,400 people, including over 400 children, were killed in the August 21 attack in the Damascus suburb of Ghouta, and has used the incident in an attempt to rally international and domestic support for a military strike on Syria.

The use of force against Syria by members of the international community has been put on hold in recent weeks after Russia and the US reached agreement on September 14 on a plan to put all of Syria’s chemical weapons under international control, and then destroy or remove them from the war-torn country by the middle of 2014.

Updated with more background, and extra comments from Lavrov interview