VTsIOM, a state run pollster, said late Sunday that Sobyanin got 53 percent of the vote, while Navalny received 32 percent. A Communist Party candidate came third with 8 percent. The poll was commissioned by RIA Novosti and involved 26,574 voters at 200 polling stations.

Navalny’s election campaign cried foul, claiming that its polls gave Sobyanin only 46 percent – a figure that suggests a second round – while Navalny got 35.6 percent.

“The exit polls undoubtedly show that there will be a second round,” Navalny told journalists after announcing the results, according to video posted online by his campaign. “We call on Moscow city hall not to take any steps and falsify the results. We understand very well that they are tempted to add another eight or nine percent of the vote and make it look like a first-round victory.” 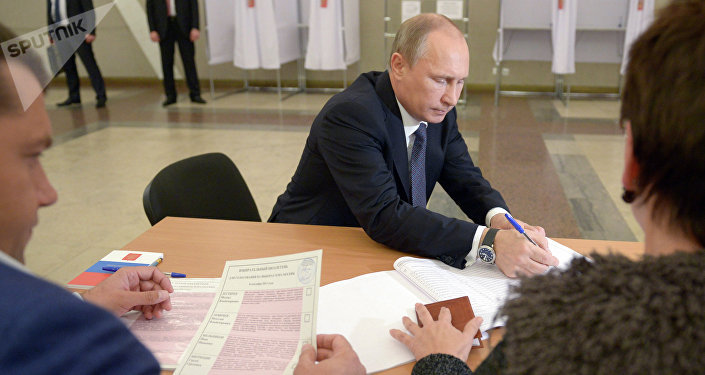 Sobyanin, an ally and former administration head of President Vladimir Putin, was uniformly expected to win the mayoral seat by a wide margin. His campaign manager praised the election as transparent and violation-free.

"There was no significant complaints, problems, violations in Moscow," Lyudmila Shvetsova said. "There was nothing that could compromise Muscovites' will and desire to participate in the mayoral election.

Navalny’s results, though, showed that a relative newcomer who became politician less than two years ago, has alone exceeded the combined efforts of four other mayoral hopefuls, whose parties form the so-called “system opposition” to the Kremlin’s United Russia party.

Navalny’s strong showing “is, of course, a sensation, because the figures are a lot higher than what’s been predicted,” political analyst Mikhail Vinogradov told RIA Novosti.

It said that its websites were paralyzed by cyber-attacks and blamed the Kremlin for allegedly organizing them.

Preliminary results released by the Central Election Commission showed that Sobyanin led with 52.99 percent of the vote, while Navalny trailed with 25.8 percent. The results were received after counting 23.12 percent of the ballots, it said.

The Moscow election – first in a decade and marked by the turnout of 33 percent despite media buzz and massive campaigns by most of the hopefuls – was the most important of regional and municipal elections that took place in Russia Sunday.

Gubernatorial elections, in addition to Moscow, were held in seven other Russian provinces, including the Moscow region and the volatile North Caucasus republics of Ingushetia and Dagestan.

Authorities worked intentionally to keep Navalny in the race, in what analysts say was an effort to boost the legitimacy of the crucial vote after tens of thousands of Muscovites took to the streets to protest the 2011 parliamentary and 2012 presidential elections results. The opposition claimed the contests were rigged in favor of the Kremlin.

Popular elections of regional heads were abolished under Putin’s initiative in 2004 as a move to strengthen federal control over the regions in the wake of the Beslan school hostage crisis in the Northern Caucasus. The regional heads have since been voted in by regional legislatures after being nominated by the president – as happened with Sobyanin in 2010.

Popular votes for governors were reinstated in 2012, but Dagestan and Ingushetia will opt out of direct election. Local legislatures, under a law enacted in April, can still select the new head if authorities believe a direct vote could result in instability and violence.

Moscow’s mayoral election were something of a surprise, as Sobyanin still had two years left in his term when he unexpectedly announced in June that he would step down and run for his own seat.

“Muscovites don’t want elections in two or three years, but now,” Sobyanin said in a radio interview with Ekho Moskvy in late August. “I realized that if I leave everything to circumstance, after a while they’ll consider me a coward.”

Sobyanin’s only real competitor was Navalny, who was the only – and, possibly, the first-ever – candidate to run a Western-style campaign in Russia. Navalny’s powerful role in Moscow’s protest movement lent his candidacy an air of genuine authenticity – and the government has gone to great lengths to ensure that he competes for mayor.

Convicted of embezzlement in July, Navalny was released after one day in jail to allow him to continue his campaign pending appeal of his sentence.

Navalny, a popular blogger and corruption whistle-blower, was not widely known among the general public before he became a prominent figure in the 2011-2012 protests, but his recognition has since grown rapidly.

Though Navalny has risen to become the face of the Moscow protest movement, he regardless may lose his appeal and return to jail after the election. His conviction would legally disbar him from ever running for or holding public office in the future.