“There was an accident during the Proton-M launch. The rocket fell and exploded on the territory of the launch site,” a spokesman for Russia’s Federal Space Agency Roscosmos said.

There were no reported casualties, but officials said a cloud of poisonous smoke was generated by the rocket’s burning fuel and could spread across the local area. An emergency evacuation of personnel at the site was underway, according to Russian media reports.

The reasons for the crash were not immediately clear, but Kazakhstan’s Emergencies Ministry said a near instantaneous failure of the rocket’s first-stage engine was to blame.

Prime Minister Dmitry Medvedev has ordered a governmental commission to be formed to look into the causes of the crash and present a list of officials responsible for the accident, said his press secretary, Natalya Timakova.

Medvedev also instructed Deputy Prime Minister Dmitry Rogozin to draw up a list of measures to tighten oversight of the space sector and prevent such accidents in the future, Timakova said.

All Proton-M launches have been suspended until the commission completes its work, after which a new launch schedule will be drawn up, Khrunichev representative Alexander Bobrenyov said.

The next launch of a Proton-M rocket, set for July 20, was to have put into orbit the Astra 2-T satellite, he said.

Rogozin warned that heads would roll after the commission completed its work and more far-reaching measures would be taken on an organizational level.

The current shape of the space and rocket industry is unacceptable “for further movement forward,” he said.

The financial losses caused by the Proton-M crash with three Glonass satellites will be no less than 6 billion rubles ($200 million), a space industry source privy to the situation told RIA Novosti.

“The losses from the previous [failed launch with a Briz-M booster] totaled 5.4 billion. Now I believe [the figure] will be higher. The costs of both the satellites and the Proton-M have increased since then,” the source said.

It is the second unsuccessful launch of a Proton-M carrier rocket with Russia's flagship Glonass positioning system on board in the last three years, and is another setback for Moscow’s space program.

The blast-off, which took place from Baikonur at 8:38 a.m. local time, was broadcast live by Rossiya-24 television channel. Footage shows the rocket rolling while flying a wobbly arc, beginning to disintegrate as it catches fire and then slamming into the ground in a large ball of flame and black smoke. The whole flight lasted 17 seconds, according to Roscosmos.

There was 600 tons of highly toxic heptyl, amyl and kerosene rocket fuels on board, according to Talgat Musabaev, the head of Kazakhstan’s space agency.

Rain was helping to contain the poisonous smoke given off from the burning fuel, but it “might” continue to drift, said the head of Kazakhstan’s Emergencies Ministry Vladimir Bozhko. The nearest town to the launch site is about 60 kilometers (36 miles) away and is rented and administered by Russia.

Work at the Baikonur space center will probably be suspended for the next two or three months because of contamination, a source in the Russian space industry told RIA Novosti. A scheduled launch of a Progress M-20M spacecraft from Baikonur on July 27 is likely to be delayed, the source added.

A commission headed by Roscosmos deputy head Alexander Lopatin will be set up to investigate the causes of the crash, a Roscosmos spokesman said.

The financial cost of the accident is unclear, but the rocket was insured for 6 billion rubles ($182 million) with the Russian Insurance Center, according an insurance industry source. 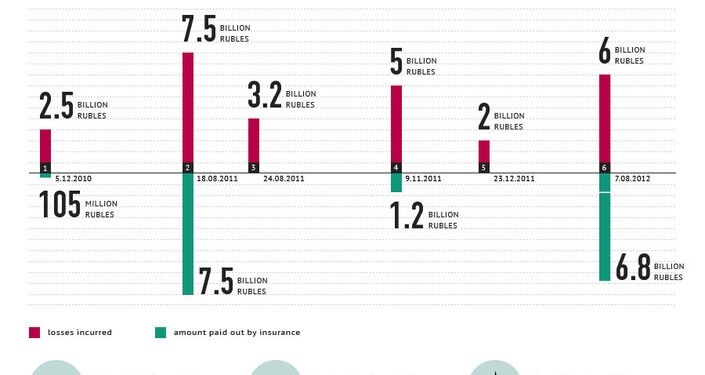 The accident is the latest in a series of problems that have plagued Russia’s Glonass program, which was begun during the Soviet era and reinvigorated with huge cash injections in the 2000s. The Kremlin’s answer to the US’ GPS system, Glonass has also been the center of several recent corruption scandals.

The Proton-M rocket has suffered a string of technical problems and launch failures. Three Glonass satellites were lost in December 2010 when a Proton-M veered off course and crashed in the Pacific Ocean. That incident was blamed on engineers overloading the rocket with fuel, said International Launch Services, the US firm that markets commercial Proton launches.

The partial failure of a Briz booster on a Proton rocket in December 2012 caused the payload to be put into an incorrect orbit, which was later corrected, Roscosmos said.