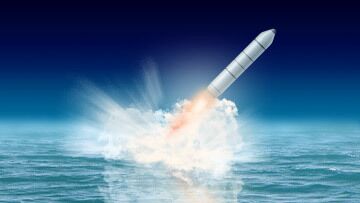 Wednesday's test was Bulava's seventh failure, according to official reports. Russia hopes the submarine-launched missile will be a key element of its nuclear forces.

"The first two stages functioned smoothly, but the flight faltered at the third stage. There was a technical failure in the third stage engines rendering them unstable," the ministry said in a statement.

The statement came after media reports on a mysterious light in the form of a spiral over Norway's northern areas several hundred kilometers from the launch site on Wednesday. Norwegian media suggested it could be a Russian missile spinning after a faulty launch.

Only five out of 12 Bulava launches have been reported successful. The previous failure occurred in July, when the missile self-destructed after its first stage malfunctioned. The latest launch had since been delayed several times.

The future development of the Bulava has been questioned by some lawmakers and defense industry experts, who have suggested that all efforts should be focused on the existing Sineva SLBM.