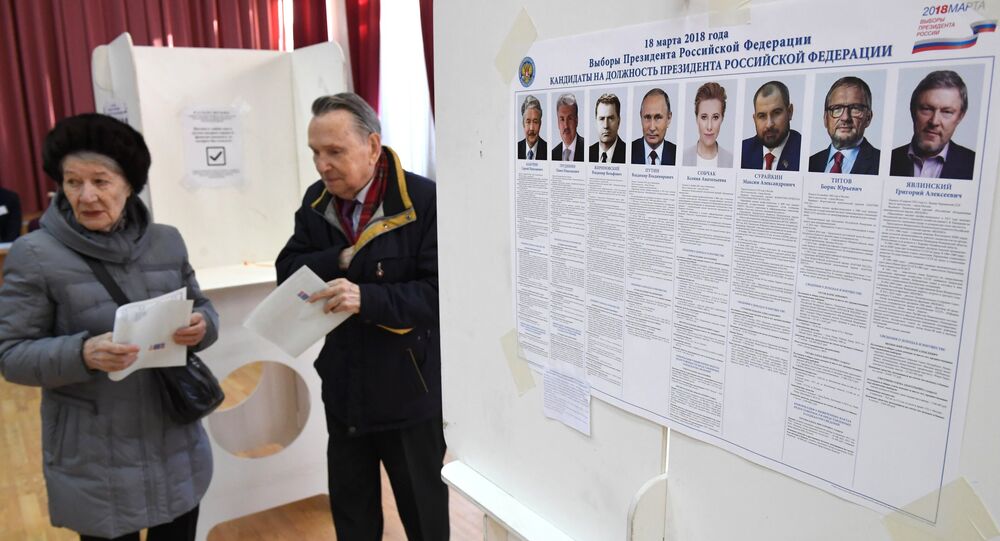 Vladimir Putin has been re-elected as Russia's President for another term, according to preliminary results. With 98 percent of the votes counted, he's leading by a huge margin and has secured over 76 percent of the votes. Sputnik discussed the election with James George Jatras, former US diplomat and adviser to the US Senate Republican leadership.

Sputnik: How do you see the international community react to the elections? Do you think we will hear a lot of allegations from the mainstream media that the elections were unfair?

James George Jatras: They are quite hostile of course, they look at the fact there are very critical elements inside the American government, certainly almost everybody on the Democratic left of the American spectrum, but almost everybody in the Republican party too, are extremely hostile, extremely anti-Russian and the media whip it along as much as they can. It's very interesting comparing it to the first Cold War, when there was actually a fair amount of opinion, especially on the left, that were not particularly hostile to the then-Soviet Union, but today it's much more uniformly hostile, I would say.

Sputnik: We've received information that President Putin is leading and actually winning the elections, but who do you think will be the second lucky winner?

James George Jatras: I suppose it would be a toss-up between the Communist candidate and the Liberal Democratic candidate. If I recall the polls, they were just above or below 10 percent so I think it really won't be a factor in this election, especially with the last report I've heard of the exit poll at 76 percent, Mr. Putin is actually doing a little bit better than what the polls were showing, although the turnout seems to be a little bit lower than it was anticipated but still above what the turnout is for American elections.

© Sputnik / Alexander Piragis
Russia Votes: 'Elections Won't Have Fair Review in the West' - Analyst
Sputnik: Were you surprised by the high voter turnout? According to recent information, in Moscow voter turnout exceeded 50 percent.

James George Jatras: No, not really, as I say, you have to ask, 'compared to what?' It's lower than you generally find in European elections; in American elections, if you get 50 percent that's a very good turnout, so I think it's within reasonable expectations. There was earlier talk of 70 percent turnout, but I think that was on a nationwide basis and I don't know how Moscow was compared to nationwide figure.

Sputnik: How do you see the international community reacting to the news that Mr. Putin has won the elections? And do you think we will hear a lot of allegations from the mainstream media that the elections were unfair?

© Sputnik / Svetlana Fedotova
UK Mainstream Media Falsely Alleges Russian Election Fraud - European Politician
James George Jatras: I think we will, I don't know how severe they will be, I think they will just try to fit it into the overall narrative that Russia is not really a democratic country, that the media are all controlled and pro Putin they will say, that his political opponents turn up dead and that sort of thing. Even though his election was expected, they will not feel it as a democratic outcome, they will criticize it as not free and fair, even though they can't point out many actual abuses or specific incidents. For example, I was an observer in 2012 and they are very particular in checking people's identification when they vote. Here in America in most places they don't check your identification when you vote, you don't even have to present evidence of citizenship when having to register, which many Americans are concerned opens the door to fraud. So I don't know by what standard they will judge the Russian elections but I'm certain we'll hear a lot of it.

Sputnik: Making forecasts in this day and age seems useless because things change so fast, but how do you think relations between Russia and the United States will develop?

James George Jatras: I think unless something very dramatic happens to change the outlook they are going to continue to get worse and they will get much worse. Unfortunately, despite, what seems to be his sincere desire to improve relations with Russia, Donald Trump is completely boxed in and part of it is his own doing. He has appointed people to his top positions that are very anti-Russian, to start with, with the departure of Rex Tillerson who seemed to be at least somewhat broad-minded, with Mike Pompeo as Secretary of State; it won't be that way, I think we're in for a very rough ride.

© REUTERS / Yuri Kadobnov/POOL
Italian Observer: Election Results Prove Support for Putin's Political Course
Sputnik: Do you think the anti-Russian hysteria will continue to grow in the US? And how do you see Mr. Muller's investigation develop?

James George Jatras: It's hard to see what's going to happen with the Muller investigation, there's a new spin now with the firing of Andrew McCabe, the number two man at the Justice Department. There's going to be pressure to try to wrap up this investigation, the fact that the House of Representatives ended its investigation without finding any [evidence of] collusion because, of course, there is no collusion, I don't know it is going to work or not. Unfortunately the entire establishment class is so worked-up about anti-Russian hysteria, even Trump's defenders stick to the same anti-Russian narrative they just want to flip it off the Democrats and away from Mr. Trump, so I don't see that changing, but at the same time, given how many more people are becoming skeptical about our political class and our media, I do think there is a reservoir of public opinion, especially among Conservatives, that do not accept this 'the Russians did it' narrative about everything.

Sputnik: President Putin recently made a statement about the country's military advances, some experts called it a new arms race, what are your thoughts on that?

James George Jatras: Mr. Putin was very clear about what his intentions were here; that over and over again the Russians have tried to engage the West in dialogue and the West has turned a deaf ear and simply acted more and more provocatively, now he's saying with these new weapons, 'do you hear us now, will you talk now'. Unfortunately, I'm afraid the answer is going to be no. That rather than engaging meaningfully, given that the military options from the West are now limited, they will simply treat this as a Russian provocation, that somehow it is the Russians starting a new Cold War. I'm afraid you will not see the kind of realistic response that should be the result of the unveiling of these new weapons systems.

From Cheerful Crowds to DDOS Attacks: Highlights From 2018 Presidential Election