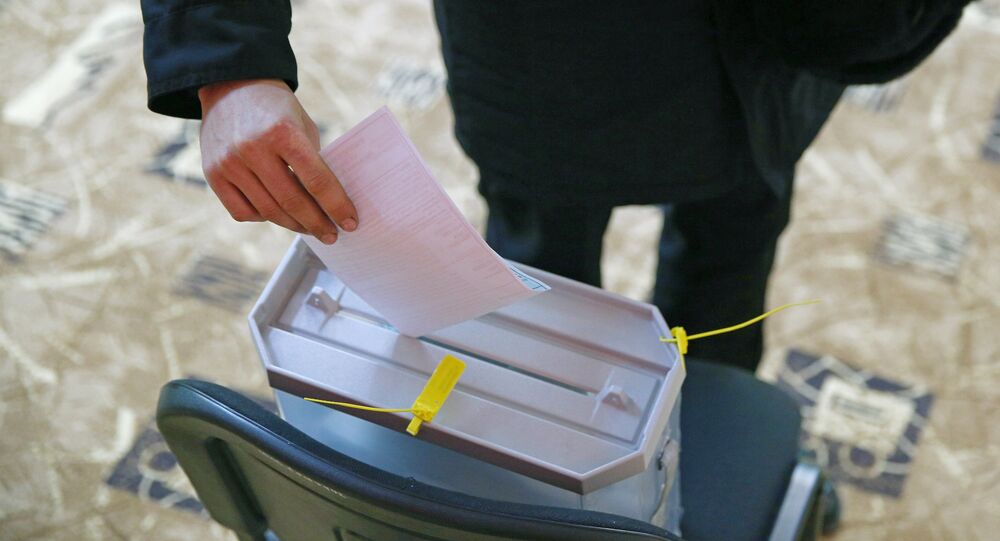 MOSCOW (Sputnik) - The Russian voters will cast their ballots at the presidential election on Sunday to choose a person who will run the country during the next six years. First polling stations will open in Russia's Kamchatka Territory and Chukotka Autonomous Area at 08.00 a.m. Sunday local time, or 20:00 Saturday GMT.

Ahead of the election, the Russian Central Election Commission (CEC) has carefully checked the number of voters in order to cleanse the voter lists of phantom voters and repeated mentioning of voters. It also cooperated with the Russian Interior Ministry to rule out the double reporting of those who permanently reside abroad being registered in Russia.

The CEC this year simplified the previously complicated process of voting at the place of one's factual residence. The residents of Moscow who decided to cast their ballots for a presidential candidate and vote on the address of permanent residence registration may choose the most convenient polling station among 3,605 ones, only taking their passports with.

According to Ella Pamfilova, the CEC chairwoman, the Russian election system is completely ready to hold the presidential election.

© Sputnik / Alexei Malgavko
LIVE UPDATES: Putin Leading Presidential Election, Wins According to Polls
Some 97,000 ballot stations will open on Sunday in Russia, and another 400 polling places will be established in 145 other countries. Nearly one million people in the election commissions are engaged in the organization of the election.

The polling places are predominantly organized in the educational facilities. They are also located at military units, on ships that will be away in at sea on the voting day, polar stations, airports, detention facilities and health resorts.

Technologies in the Election Process

QR-codes will be used at the upcoming election to count voting results for the first time. This should reduce the number of mistakes due to human error and also accelerate the feeding of protocol data into the State Automated System Vybory. The CEC hopes that the use of QR-code technology will allow the cast ballots to be counted in record time.

More than 1,500 foreign observers have been accredited to monitor the Russian presidential election, which will be comprised of diplomats and parliamentarians, among others.

© Sputnik / Ilya Pitalev
Russian Election Commission Refutes US Claims of Observer Status Denials
The vote would also be monitored by 300 representatives from the Commonwealth of Independent States (CIS), as well as representatives of the Parliamentary Assembly of the Organization for Security and Co-operation in Europe, the Shanghai Cooperation Organisation (SCO), representatives of 52 embassies located in Moscow and other organizations.

There will be also public observers, including from the Civic Chamber of Russia, which has received the right to send observers to the voting stations.

The CEC launched a large-scale campaign to inform about the election and introduced new opportunities for voters to cast their ballots.

© Sputnik
Putin Likely to Win Election as Anti-Russia Hysteria Grips US and UK
Free air time is provided on five federal TV channels and three radio stations. Each of the presidential candidates receives an hour of time plus an hour to the parties that nominated the candidates.