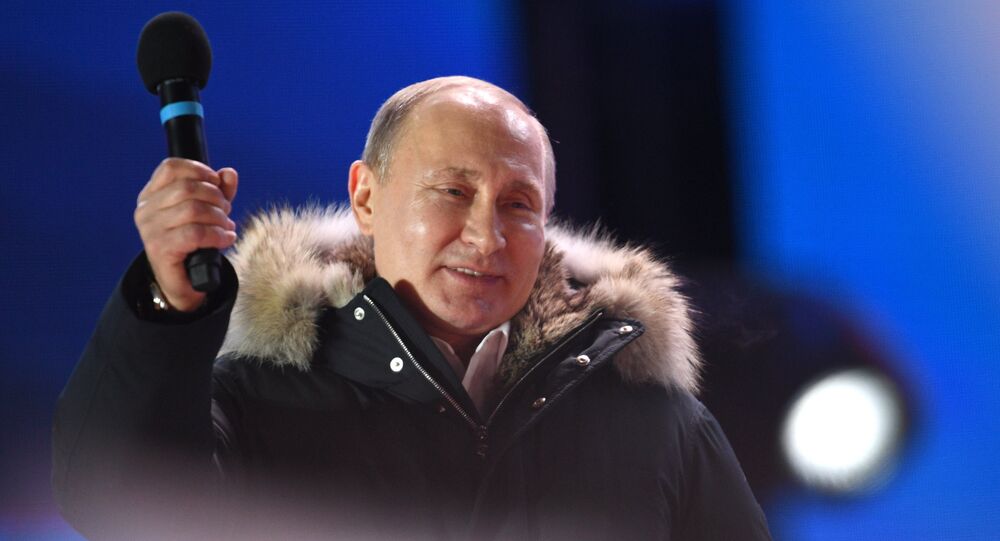 MOSCOW (Sputnik) - The Kremlin's spokesman has unveiled Russian President Vladimir Putin's plans following his re-election; he also spoke about the country's current relations with the United Kingdom in the wake of Skripal's poisoning, which London has blamed on Moscow.

On Putin's Plans After Re-Election

The president's plan for Russia’s development, which was outlined in Putin's address to the Federal Assembly, has already been covered by the relevant instructions, Kremlin spokesman Dmitry Peskov said.

"The president has an absolutely harmonious, coherent, consistent and impressive plan for the development of the country…. You know that this plan has been covered in the list of the president’s instructions, on the basis of which a roadmap will be prepared in one form or another," Peskov told reporters.

The spokesman went on saying that Sunday's presidential election in Russia have proved that the Russian society is highly consolidated.

Russia held its presidential election on Sunday. The latest figures from the Central Election Commission (CEC) show that voting data from over 99 percent of polling stations has already been processed. According to the election commission, Putin has gained over 76 percent of the vote.

"There is hardly any influence of, so to say, international affairs on these processes… Conflict situations can hardly impact any internal Russian processes," Peskov said, when asked if the situation around UK allegations against Russia would influence the formation of a new government.

The spokesman noted that he would not want to call the current state of affairs "the aggravation of the relations with the West."

"In this case, we are talking about an avalanche of false claims against Russia, which is hard to explain, with unclear motives and without any grounds, from the United Kingdom," Peskov said.

© Sputnik / Alexander Piragis
Russia Votes: 'Elections Won't Have Fair Review in the West' - Analyst
The spokesman added he could understand the solidarity of the NATO and other UK allies, that backed London in this situation, but stressed that the groundless claims would have to be substantiated at some point.

The new government in Russia will be formed following the presidential election held this Sunday, in which incumbent President Vladimir Putin secured the fourth term by a large margin. It comes amid London claims that Moscow was behind the poisoning of former Russian spy Sergei Skripal, currently treated for exposure to a chemical substance in the United Kingdom. Russia has strongly refuted the allegations.

Putin's Phone Call With May Not on Agenda Yet

Peskov noted that Putin had already received congratulations on his victory in Sunday's presidential election from representatives of a number of western states, Kremlin spokesman Dmitry Peskov said on Monday.

"Today and tomorrow we will have a number of telephone conversations, we will tell you about that. I would not yet speak about what we are getting through diplomatic channels or name specific states," the spokesman added.

Amid London claims that Moscow was involved in the poisoning of former Russian intelligence officer, Peskov stressed that a phone conversation between the Russian President and UK Prime Minister Theresa May had not been planned yet.

Bilateral relations between Russia and the United Kingdom deteriorated following the attempted poison attack on former Russian intelligence officer Sergei Skripal and his daughter in Salisbury. May blamed the incident on Moscow, claiming that the substance allegedly used in the attack was developed in Russia. Russia denied all accusations and expressed readiness to collaborate on the investigation. The two countries have already imposed restrictive measures on each other.