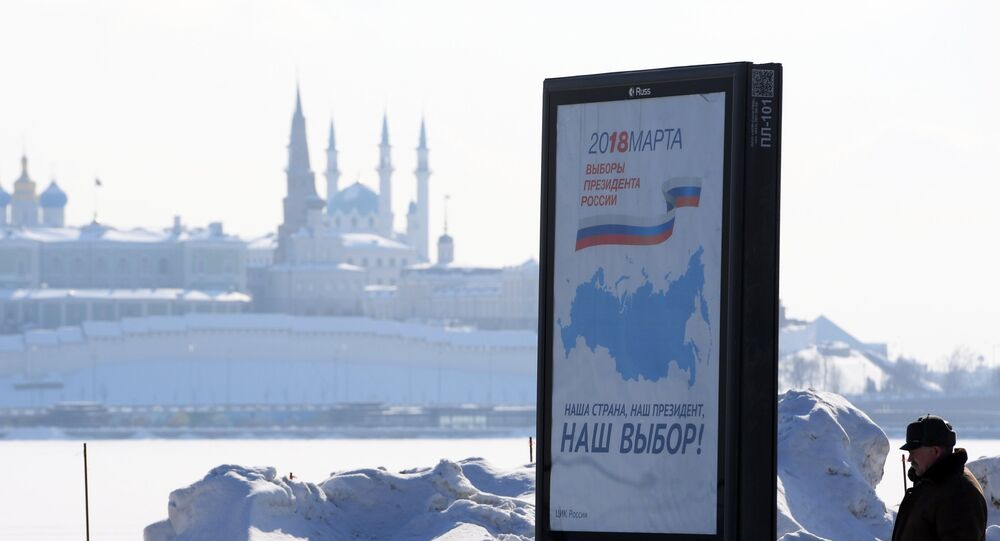 MOSCOW (Sputnik) - The presidential election is being held across the Russian Federation on Sunday, March 18.

The president of the Russian Federation is elected for a term of six years by citizens of the Russian Federation on the basis of universal, equal and direct suffrage by secret ballot. Citizens of Russia who are not younger than 35 years and have permanently resided in Russia for at least 10 years may be elected president. The same person cannot hold the office for more than two consecutive terms.

Citizens of Russia, who have citizenship of a foreign state or hold a residence permit or any other document, affirming the right to reside permanently in a foreign state, cannot be elected president of Russia.

The Russian citizens, who are not entitled to be elected, are listed below:

— those sentenced to imprisonment for a serious crime and/or felony and having on the voting day a conviction that has not been expunged or spent;

— those whose conviction for a serious crime has been expunged or spent less than 10 years before voting day;

— those whose conviction for a felony has been expunged or spent less than 15 years before voting day;

— those sentenced for the commitment of extremist crimes under the Criminal Code of the Russian Federation and having on the voting day a conviction that has not been expunged or spent;

— those administratively punished for the commitment of encouraging extremism or for the production and distribution of extremist material, if the voting is conducted before the end of the period of this person’s administrative punishment;

— those who have been sentenced by a court for violations of Federal Law On Combating Extremist Activities, if said violations or activities took place within six years of the voting day.

The presidential election will be held in the single federal electoral district that comprises the entire territory of the Russian Federation.

Citizens of Russia, who have reached the age of 18 years by the election day, have the right to elect a president of Russia.

Citizens of Russia, who reside or are traveling abroad during the election campaign and on voting day, have equal rights with all the other citizens of the Russian Federation to elect a president of Russia.

Those, who have been declared incompetent by the court or are serving a prison term by a court decision, are not allowed to elect or be elected president of Russia as well as to take part in other electoral activities.

© Sputnik / Ramil Sitdikov
Russian Electoral Technologies Ensure Vote Transparency - Observer From Uzbek Upper House
The day for the presidential election is the second Sunday of the month when the previous presidential election was held. If the Sunday on which the presidential election should be held falls on the day preceding a public holiday, or if this Sunday falls on a week that includes a public holiday, or if this Sunday is declared to be a working day, elections are held on the following Sunday. The decision regarding voting day is to be made public in an official statement published by the media no later than five days after it was adopted.

Presidential candidates can nominate themselves or be nominated by political parties that have the right to take part in elections, including nominate candidates, in keeping with Federal Law On Political Parties of July 11, 2001.

Any citizen of Russia, who holds the passive right to vote, may nominate himself or herself for the post of president of Russia after the official publication of the decision setting the date for the presidential election. The independent candidate should form a group of at least 500 Russian citizens with the active right to vote in order to support his self-nomination. A voter may only join one group in support of an independent candidate.

Independent candidates must collect at least 300,000 signatures in his/her support, not more than 7,500 signatures per one federal subject. The total number of signatures collected among the voters who permanently reside outside Russia may not exceed 7,500.

© Sputnik / Maksim Bogodvid
Russia Sees 153,500 Early Voters in Presidential Election - Election Commission
A political party must collect at least 100,000 signatures in support of its candidate, but not more than 2,500 signatures per one federal subject. The total number of signatures collected among the voters who permanently reside outside Russia may not exceed 2,500.

The registration of candidates from the political parties, that hold seats in the current State Duma, may be based on the party's decision to nominate a presidential candidate without collecting signatures.

Likewise, candidates from political parties, that hold seats in the legislative (representative) assemblies of at least one-third of the federal subjects of Russia as of the official publication of the decision setting the date for the presidential election, do not need to collect signatures for their registration as presidential candidates.

Signatures in support of the nomination of candidates can be collected at educational establishments, residential and other places, where the collection of signatures and election campaigning are not prohibited by federal law.

Voters can give their signatures in support of as many candidates as they wish but only once per each candidate.

Federal agencies, local governments, the management of companies and organizations of all types of ownership, as well as voting members of election commissions may not take part in the collection of signatures.

The CEC must announce its decision to register or a substantiated refusal to register a candidate no later than 10 days after receiving registration documents.

The events related to the preparations for and the holding of the presidential election shall be financed from the federal budget, while the candidates must create their own election funds to finance their election campaigns.

The candidates’ election funds may include the following monetary assets:

– the candidate’s own funds, the amount of which may not exceed 10 percent of the total spending of the said candidate’s election fund or 15 percent for the candidates taking part in the second round;

– the funds allocated to a candidate by the political party that nominated him/her, the amount of which may not exceed 50 percent of the total spending of the said candidate’s election fund set by the Federal Law;

– voluntary donations from individuals and legal entities, the amount of which may not exceed 1.5 percent and 7 percent, respectively, of the total spending of the said candidate’s election fund.

Total spending of the candidate’s election fund may not exceed 400 million rubles ($7 million).

Total spending of the election funds of the candidates taking part in the second round of voting cannot exceed 500 million rubles.

Voting takes place between 8 a.m. and 8 p.m. local time. If a polling station is established at the residence of voters, whose working hours coincide with the time of the conduct of the vote (at companies that operate non-stop or in shifts), the election commission of the federal entity can bring forward the starting time of voting at this polling station, but by not more than two hours.

Territorial and district election commissions must notify the people about the voting day, the time and the place no later than 30 to 10 days prior to the voting day through media or by other means.

READ MORE: Election Day Fun: What Else Russians Will Be Doing During Sunday's Vote

District election commissions must create voting conditions for voters, who are on or can be put on the local voters’ list but cannot come to the polling stations on their own due to poor health or disability reasons.

© Sputnik / Mikhail Alaeddin
Russian Embassy in Damascus Opens Polling Place for 2018 Presidential Election
Ballot papers are issued to voters, who are on the said district voters’ lists, upon the presentation of a passport or an equivalent identification document.

On the ballot, the voter shall put any mark inside the blank box to the right of the name of the registered candidate for which he/she votes.

Each voter shall vote in person. Voting for other voters is not allowed.

If a voter thinks that he/she has made a mistake when marking a ballot paper, he/she may ask the election commission member, who issued the ballot paper, to give him/her a new ballot paper instead of the spoiled one.

Voters shall drop marked ballots into a sealed stationary ballot box or electronic vote-counting equipment if it is used.

The registered candidate who receives over 50 percent of the votes of those, who took part in the voting, is to be declared the winner. The number of voters taking part in the voting shall be determined through the counting of ballots in the ballot boxes.

If one of the registered candidates, who should take part in the second round removes his/her candidacy or cannot take part in the repeat voting for any other reason, the CEC shall assign his/her place to the candidate with the third largest number of votes.

Following the second round, the candidate, who received more votes than the other candidate, taking part in the repeat voting, shall be declared president.

If the presidential election is declared null and void, or if both of the registered candidates, who were to take part in the repeat voting, withdrew their candidacy or could not take part in the voting for any other reason, or if none of the candidates, taking part in the repeat voting, receive the necessary number of votes to be declared the elected president of Russia, the Federation Council shall order a rerun of the presidential election.

The candidates whose actions/inaction provided reasons for the declaration of the election or the second round of the election null and void are not allowed to take part in the rerun election.

Upon assuming office, the president of Russia takes the oath of loyalty to the people during a solemn ceremony.