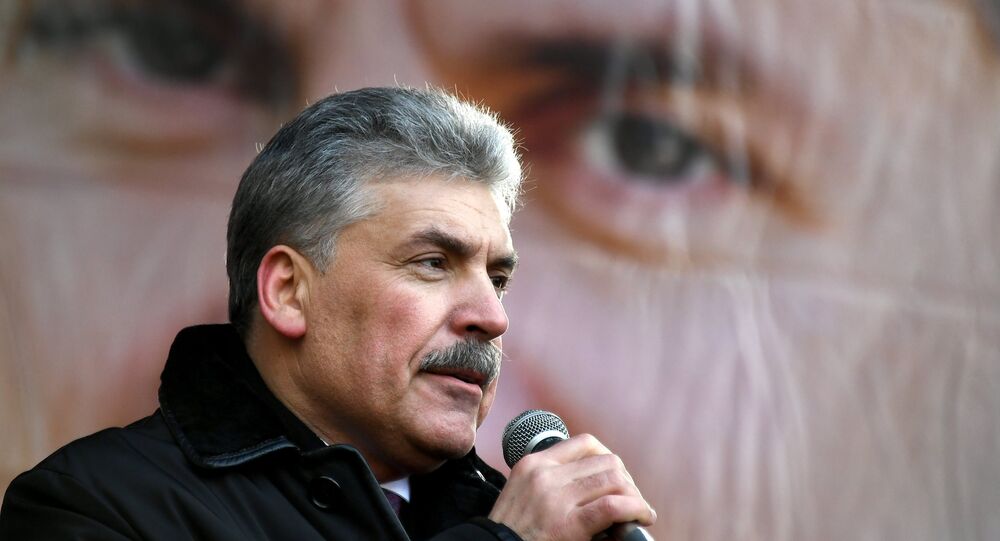 "The Federal Tax Service has sent a request to the Swiss authorities… in response to which the Swiss colleagues informed us that, in addition to the two accounts that we had already mentioned, including on information posters, Pavel Nikolayevich Grudinin has 11 more accounts. According to the information provided by the Swiss Tax Administration, he had 13 accounts in a Swiss bank as of December 31, 2017," Kinev told reporters.

READ MORE: Total of 400 Polling Places Set Up Outside Russia for Election — Commission

According to the official, the CEC is set to discuss this issue at a meeting on Wednesday. The CEC member noted that most likely the commission would request lower-level commissions to supplement posters, which would be put at polling stations, with the information on the newly discovered bank accounts.

Deputy Chairman of CEC Nikolay Bulaev said later on Monday that the candidate kept not only money, but also gold in a Swiss bank.

"As for the total amount of money, the Swiss data, which is confirmed by our federal tax service, says that it is about $1million, including more than 174 ounces of gold," Bulaev told the Rossiya 24 broadcaster.

Grudinin has not informed the CEC about these accounts, Bulaev said.

The deputy head of the election watchdog said that the CEC was required by law to add these facts to the poster with the information about candidates.

"The poster has already been released. Actually, we will have to print out an additional information bulletin. And I hope voters will be able to learn full information now about the assets and income of all candidates in full compliance with the law on the election of the Russian president," Bulaev said.

© Sputnik / Vitaliy Ankov
Over 1.3Mln Russians Want to Vote Outside Permanent Residence in 2018 – Election Commission
Grudinin is the Communist Party candidate in the upcoming presidential election. He is running for the top post in Russia along with Sergey Baburin from the All-People's Union party,  head of the Liberal Democratic Party of Russia Vladimir Zhirinovsky, incumbent Russian leader Vladimir Putin, who is running as an independent, Civil Initiative party candidate Ksenia Sobchak, Communists of Russia party Chairman Maxim Suraykin, business ombudsman Boris Titov, and co-founder of the Yabloko Party Grigory Yavlinsky.

The next presidential election in Russia will be held on March 18.