The upcoming Saint Petersburg International Economic Forum will see the participation of Indian Prime Minister Modi and the Saudi Energy Minister, among many other dignified guests. 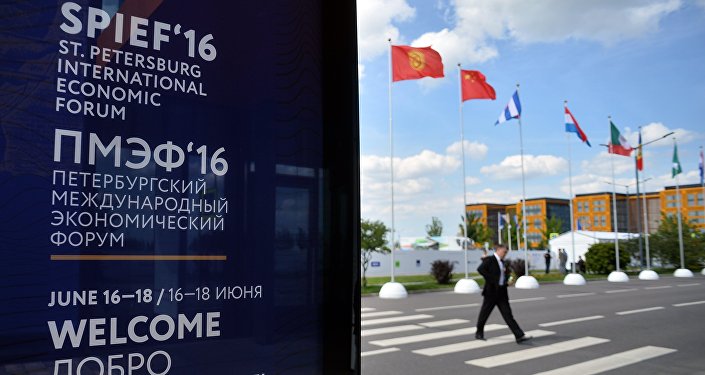 © Sputnik / Maksim Blinov
Putin to Meet International Sovereign Funds Heads at SPIEF
Regularly referred to by pundits as the “Russian Davos”, SPIEF, as it’s colloquially called, brings together some of the most important movers and shakers in the global economy. This year’s event will see a robust agenda of panels, roundtables, and conferences where participants will discuss a wide range of topics including technology, tourism, industry, energy, and even International Relations. SPIEF was originally unveiled in 1997, though this gathering has taken on a renewed significance in the past couple of years ever since the West’s anti-Russian sanctions and Moscow’s consequent quest to diversify its economic relationships.

Russia has since used the platform to reinforce existing and pragmatic Western partnerships while also spearheading breakthroughs in forging new non-Western ones. The second category of engagement includes the Eurasian Economic Union’s rapidly developing relations with East and Southeast Asian states, attracting investment deals from the Mideast, and strengthening the decades-long friendship with India. While Russia’s high-level and comprehensive strategic partnership with China is a well-known fact in today’s world, as is its ambitions to build ties with ASEAN, comparatively less has been said about Moscow’s economic engagement with the Mideast and its future vision for South Asia, both of which will figure prominently in this year’s SPIEF gathering due to the participation of the Saudi Energy Minister and Indian Prime Minister Modi, respectively.

© Sputnik / Maksim Blinov
SPIEF 2017 Marks a Revival in US-Russia Business Dialogue, Russian Official Says
All geopolitical contradictions aside, of which there are admittedly many, Russia and Saudi Arabia have proven to be trust-worthy partners over the past year in the sense that they both trailblazed last year’s OPEC output deal and took the lead in renewing it just recently. Russia has also been courting Gulf investments to make up for the loss of Western capital in its economy, so it’ll be interesting to see what sort of economic outcomes result from the Minister’s visit. As for India, Russia is cooperating with the South Asian state in constructing the transcontinental North-South Transport Corridor through Iran and Azerbaijan, which will ultimately link the two BRICS members together. There’s also the chance that both sides might sign a massive nuclear energy deal, too.

Though the Mideast and South Asia aren’t exactly the regions that come to mind when people think about Russia’s 21st-century economic strategy, this year’s SPIEF might change all of that if the right deals are sealed.

Joaquin Flores, Editor-in-Chief of Fort Russ and Director of the Center for Syncretic Studies, and Vladimir Rodzianko, Managing Director at The Duran, join the show.