Where Does Heroin in the US Come From?

While large-scale international war has yet to break out, seemingly enough, a domestic war is about to be re-kindled. 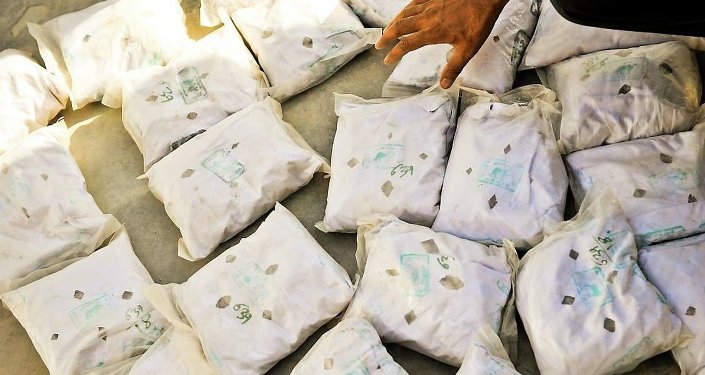 © Flickr / UK Ministry of Defence
What a Dope! US Ship Seizes Nearly 600 Pounds of Heroin in Arabian Sea
The old woman, who was living on social security, hit an unexpected rough patch when she found herself raising her grandchildren after her daughter died and her son became ill. After a while, she realized that this lifestyle was for the birds, so she thought long and hard about what she could do, and like most people these days, began digging among the boxes in her garage for stuff to sell online. Opening an old box, she hit the payload. Getting out a present given to her husband, she immediately began to feel better. Knowing who exactly would be interested in the trinket that could bring in a few needed dollars, she made a phone call, and that is where our story begins. The party that she contacted became interested in what she was selling and agreed to meet her at a local diner at a specific time.

The woman went to the meeting and found the buyer in the parking lot. Upon identifying her, six heavily armed officers forcibly took the woman’s paper weight, which happened to be a moon rock the size of a piece of rice, from her by gunpoint. Upon seeing masked men covered in body armor with weapons drawn shouting at her and eventually forcing her to lie on the ground like a common criminal, understandably the old woman peed her pants. As it all went down, the lead officer shouted at her — “Where’s the rock? Where’s the rock? If you don’t tell me, you will go to Federal jail!” Because, that’s right — it is illegal to sell moon rocks and apparently NASA, the space agency, has a specialized team of highly trained commandos ready to stop anyone that tries, even silver-haired 75-year-old women.

This week has been awash in news of war, possible war, and even potential nuclear war. Even though the American people elected Donald Trump to be a president of peace, as opposed to Hillary Clinton, which more than likely would have been a hawkish president, war is what the American people, and the world for that matter, are getting, whether they want it or not. And while international war has yet to break out via false flags, outright provocations, tragic mistakes or even great misunderstandings, there is at least one domestic war that that is also seemingly about ready to kick-off.

© CC0
It's Official: Psychedelic Drugs Really Do Produce Higher State of Consciousness
Recently, the BBC wrote an article that was headlined — “Officers rue the return of US 'war on drugs'. That’s right. The so-called war on drugs is back in vogue. The article continued — “Nearly half a century ago, Richard Nixon called for an "all-out offensive" on drug abuse. It was the opening salvo in America's longest running war. Successive presidents took up the call to arms. Arrest rates soared and mandatory minimum sentences sent young men — particularly black men — away for long stretches for low-level offenses.” Some have even argued that the war on drugs was really a war on minorities, but that is a topic for another time.

The article continued — “Then as violent crime rates fell under George W Bush and prisons became clogged, prosecutions eased. The war on drugs fell out of fashion. Barack Obama called it "unproductive" and sent memos guiding prosecutors away from pursuing low-level offenders. Now a new administration looks set to turn back the clock. Attorney General Jeff Sessions likes to reminisce about the aggressive law enforcement of the 80s and 90s and recently labeled cannabis "only slightly less awful" than heroin.”

And speaking of heroin, or hey-ron, as they also call it, Breitbart recently ran an article where — “US Department of Homeland Security (DHS) Secretary John Kelly has largely blamed Latin American drug cartels for the unprecedented 52,000-plus drug overdose deaths in America during 2015 alone, the latest year for which data is available.” That’s right. 52 thousand people died of drug overdoses in 2015. And that’s up from 2014, where 47 thousand people died from similar causes. In total, around 100 thousand people have died due to taking too many drugs, the great majority of them opioid related.

YouTube/Sputnik
That's Bananas! Drugs Found in Fake Fruit
In fact, the Breitbart article noted that — “It’s the highest number of drug-related deaths (America) has ever seen. It’s more deaths than the peak of the AIDS epidemic in 1995. In (2015), a single year, nearly as many Americans were lost to drug overdose … in 12 years in Vietnam.” But that’s not all — and here is where it gets interesting.

In that article, “Kelly said that most of the heroin in the United States originates in Mexico.” Mexico! While “…the majority of heroin in neighboring Canada comes from Afghanistan”. That’s right. From half way around the world! In fact, a recent “DEA estimate suggests that only one percent of the Afghan-based drug makes it into the United States.” Which seems strange, right? Canada also shares a large unsecured border with America, but apparently, heroin only flows from countries with mostly brown people to countries with mostly white people. Fake news, much?

© Flickr / ackab1
'Behind Bars': UK 'Drone Squad' to Foil Aerial Drug, Arms Deliveries to Jails
The Breitbart article addressed this issue when it wrote — “Not everyone agrees with the DEA’s assertion that most of the heroin in the US is cultivated in Mexico. Last year, an article published by the Alliance for Human Research Protection (AHRP), a patient advocacy group, criticized the former US administration and the mainstream media for misleading the American public about the influx of heroin from Afghanistan.” It continued — “In the report, a scientist and author of articles in scientific journals, including the Journal of Biological Chemistry, noted: Heroin from Mexico cannot supply even 10% of US heroin demand. Yet the DEA claims most heroin in the US is from Mexico.” So, where does the rest come from? Could it be that very same Afghanistan that America has arguably occupied for more than 15 years now?

So, what do you think dear listeners — “Where does heroin in the US come from?”