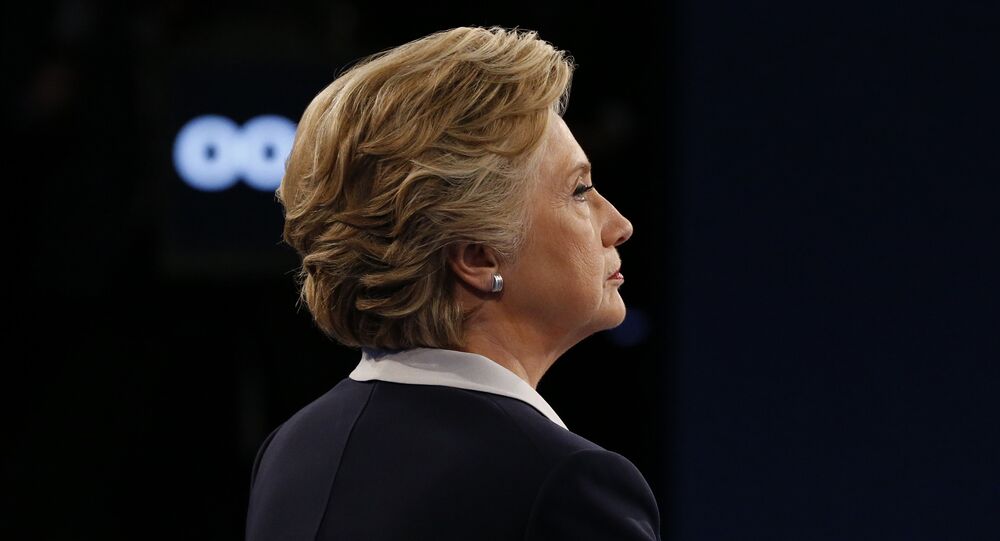 Hillary Clinton's new book has prompted a heated debate in the US mainstream media on both the purpose of the book and its content. While opinions differ over what the former Democratic presidential nominee's opus is actually about, the consensus is that apparently no one would give Hillary a second chance.

Hillary Clinton's book "What Happened" has caught headlines, triggering a full range of emotions on both sides of the political spectrum: from The New York Times remark "it's worth reading" to it's "dead-horse-beating," as the conservative National Review noted.

In her new 494-page book the former Democratic presidential hopeful recollects how it happened that she lost the 2016 presidential election.

However, according to the Los Angeles Times, "it would be one thing if Clinton's book delivered new insights about what went wrong. But it doesn't."

"If you're hoping to learn precisely what happened from 'What Happened,' you won't get a comprehensive explanation," Allen notes, adding suggesting that Clinton's new book "reads like a compendium of things that Clinton wanted to get off her chest."

© AP Photo / Charlie Neibergall
If Life Gives You Lemons: Clinton Releases Book About Unsuccessful US Presidential Campaign
The question arises as to who should bear the blame for Clinton's defeat.

America's left-leaning mainstream media appear to be rather sympathetic with the former candidate, and still they don't seem willing to give her a second chance.

CNN highlights that "Hillary Clinton takes ownership — to a degree — for her stunning 2016 loss to Donald Trump."

"I go back over my own shortcomings and the mistakes we made. I take responsibility for all of them. You can blame the data, blame the message, blame anything you want — but I was the candidate. It was my campaign. Those were my decisions," Clinton writes, as cited by the media outlet.

David Weigel of The Washington Post notes that Clinton "again and again… blames herself for losing" veering "between regret and righteous anger."

He highlights that "she was unable to break the presidential glass ceiling," adding that "her defeat has been genuinely traumatizing for millions of women."

However, even he compares her to "beaten Richard Nixon who told David Frost that he gave his enemies a sword and 'they twisted it with relish.'"

© REUTERS / Brendan McDermid
Clinton Has Left the Building, or Has She? “As an Active Politician, It’s Over”
The New York Times' Jennifer Senior dubs the book a "post-mortem, in which [Clinton] is both coroner and corpse," "a feminist manifesto" and "a score-settling jubilee."

The newspaper reiterates the Democrats' favorite argument that Hillary Clinton won the popular vote "by nearly 3 million" and although she failed to "shatter the country's highest, hardest glass ceiling," it "seems to have put 2,864,974 extra cracks in Clinton's reserve."

Furthermore, The New York Times doesn't mind "getting it on the chin" from Hillary Clinton, who accused the newspaper of focusing on her emails in their media narrative, which, according to the former Democratic nominee, "affected the outcome of the election."

​"As her book's title implies, Clinton has her own version of what happened in 2016, and she eventually forces readers to reckon with it," the article says, insisting that the story "is worth reading."

On the contrary, the left-centrist media outlet The Hill argues that Clinton's latest book, as well as her book tour, is only to the Democrats' harm being "the latest examples of the former presidential candidate creating fresh tensions within the Democratic Party."

"What happened is not terribly complicated," the media outlet's contributor Douglas E. Schoe points out. "Clinton lost the election to Donald Trump and weakened the Democratic Party in the process."

​The Week contributor B.D. McClay begins her article with a disconcerting: "You don't need to read Hillary Clinton's new book," and adds: "In fact, you probably shouldn't." According to the journalist, the motive for picking up Clinton's tome could be only "the simple taste for gossip," since Clinton "doesn't mean much of anything at all."

According to The Washington Times, the book is actually yet another Clinton campaign aimed at blaming "everybody she can for her crushing loss last year to Mr. Trump."

"Men, women, poor people, rich people, President Obama, Sen. Bernard Sanders, Russia — they all come in for a heavy dose of blame in her new book, 'What Happened,'" the media outlet's columnist Charles Hurt writes, adding the "leaving off the question mark from the title of her book is only the first lie of the considerable tome."

© AP Photo / Craig Ruttle)
'This is Why She Lost': Social Media Reacts to Clinton's Illegal Immigrants Flip Flop
As for National Review, its verdict is tough: Hillary Clinton's "dead-horse-beating is hilariously hypocritical." Moreover, the magazine points out that Clinton's anger is not about her party's loss in the election, it's about herself: "If Clinton really cared about her party," Katherine Timpf writes, "she'd find a means of catharsis other than a publicly damaging Tour of Petty that threatens to drag Democrats down even further."

Clinton's new book does seem to be a part of the Democratic nominee's long blame-game: As Fox News remarked, "It appears to read more like an enemies list than a campaign chronicle."

The New York Daily News outlines at least 18 people, organizations and conditions, which according to Hillary Clinton contributed to her defeat. The list contains her Democratic competitor Bernie Sanders, former FBI Director James Comey, Russian President Vladimir Putin and, to the surprise of many, former Vice President Joe Biden.

Still, whatever attitude to the former Democratic presidential hopeful the media outlets demonstrate, their message is clear: Hillary Clinton's campaign is over, the vote results are irreversible and it's time to carry on.

Clinton on Why She Lost: 'It Was Bernie, Russia, Obama, Media and ...'

Clinton’s Blame-Game Continues: This Time ‘What Happened’ Was Joe Biden