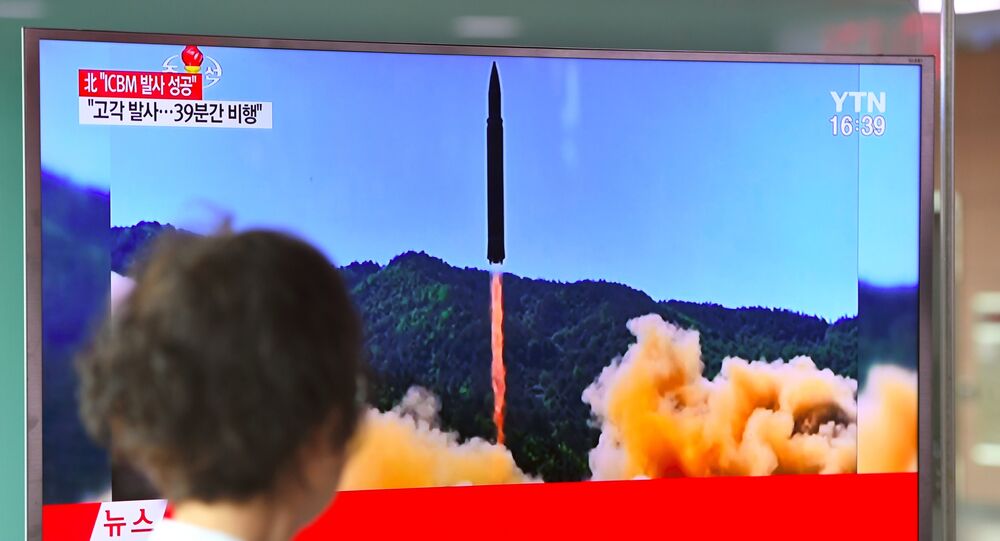 The reported claims of British officials about the involvement of Iran and Russia in the development of North Korea’s nuclear program are groundless, Russian security expert Anton Khlopkov said. According to him, by making such allegations, London is taking advantage of the current "anti-Russian atmosphere."

Talking to Sputnik Iran, Khlopkov, director of the Energy and Security Center think-tank, said that the British government wants to shed responsibility since it has not been actively involved in the settlement of the Korean crisis.

"In such context, London is seeking a guilty party, instead of taking practical diplomatic steps," he said.

© Sputnik / Iliya Pitalev
North Korea Vows to 'Make US Suffer the Greatest Pain' it Ever Experienced - Envoy
Khlopkov maintained that it wouldn’t be surprising if no evidence was found to back up British allegations.

"The North Korean nuclear crisis poses a direct threat to Russia’s security. The allegations made by our British colleagues about Russia’s involvement in Pyongyang’s nuclear program are surprisingly baseless. … London will not provide any evidence. Russia has repeatedly been accused of breaching its obligations, but without providing any facts and evidence. But taking into account the current anti-Russian atmosphere, people in the West would easily buy into such claims," the expert pointed out.

Earlier, The Sunday Telegraph reported, citing unnamed government sources that British officials believe that Pyongyang’s progress in developing nuclear weapons may be due to some sort of "secret" assistance from Iran, while Russia is also in the spotlight.

The UK is one of the signatories to the Iranian final nuclear deal. On July 14, 2015, Iran and the P5+1 group of countries, comprising the US, Russia, China, France and the UK plus Germany, signed the Joint Comprehensive Plan of Action (JCPOA), ensuring the peaceful nature of Tehran's nuclear program in exchange for sanctions relief. The plan came into force on January 16, 2016.

© AP Photo / Kevin Lamarque/Pool Photo
US to Face Difficulty in Persuading P5+1 Group to Renegotiate Iran Nuclear Deal
Since the deal was signed, London has been actively helping implement the agreement, citing that Iran’s nuclear program is of a peaceful nature. What could’ve provoked such a change of heart?

Khlopkov suggested that the United States is likely involved in this situation. London does not want to confront Washington and has to play a politically-biased game against Iran.

"First, Iran has repeatedly been accused of exporting  nuclear technologies to a foreign country. Iran is a hot topic and such allegations always make headlines. Moreover, it is clear that the US administration is increasing pressure on Tehran. This is another misinformation campaign against Iran. But it also a pretext for a new round of media pressure on Russia. However, I’m sure that London doesn’t have evidence to these claims," Khlopkov said.