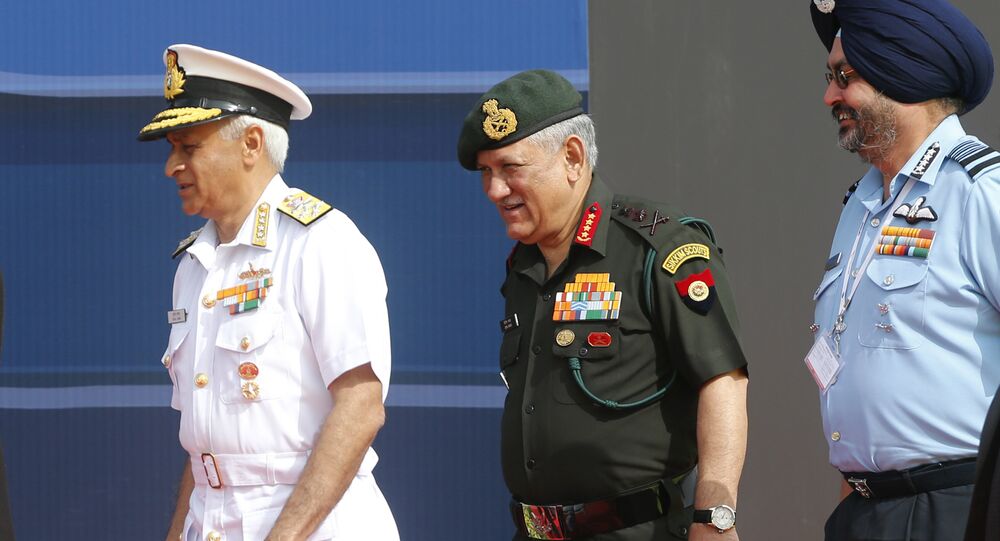 Experts say General Rawat's remarks were nonetheless significantly relevant given the frequency of intrusions by Chinese and Pakistani forces.

NEW DELHI (Sputnik) — In a clear departure from his earlier stance, Indian Army Chief General Bipin Rawat has said that neither China nor Pakistan poses an imminent threat to India.

"Neither of the countries (China or Pakistan) is a threat," Rawat said on the sidelines of an event in Uttarakhand.

This statement came only a few days after the Indian Army Chief had kicked up a controversy by saying that India was preparing for a two-front war as it recognized the imminent threats posed by its northern and western adversaries (China and Pakistan).

The Indian Army Chief's complete about face on his earlier statement was preceded by sharp criticism by the Chinese media which accused General Rawat of igniting hostile atmosphere between New Delhi and Beijing.

"Admittedly, Rawat has such a big mouth that he could ignite a hostile atmosphere between Beijing and New Delhi. He not only turns a blind eye to international rules but also made us see the arrogance that most likely prevails in the Indian Army. He advocated a two-front war in such a high-profile manner, but where does the Indian Army's confidence come from?" an editorial in China's state run Global Times read.

Experts said the Indian Army Chief could have gone back on his words considering the recent mutual understanding between India and China to avert military clashes but that does not dilute the significance of his earlier statement.

"Gen. Rawat's latest view that China, Pakistan is not a threat is likely due to a change in the situation at the India-China border after the Doklam standoff ended. He may have mellowed down his assessment, but his earlier view of threats emanating against India on both China and Pakistan border remains relevant, given the number of intrusion incidents in various sectors of India China border reported since 2013. On Pakistan, this year alone has seen a substantial increase in ceasefire violations. We cannot afford to reduce vigilance on both borders as well as ignore the fact that China and Pakistan are close allies," Dr. Amit Singh, Assistant Professor of Political Science, at the University of Delhi, told Sputnik.

The Indian Army Chief had earlier strongly noted that the "flexing of muscles" had begun and that China was "slicing salami, taking over territory in a very gradual manner, and testing our limits of threshold" which India needed to be wary about."

The remark was viewed as controversial as it came less than a week after Indian Prime Minister Narendra Modi and Chinese President Xi Jinping met on the margins of the Xiamen Brics Summit 2017 and resolved to avert military clashes and standoffs at the border.