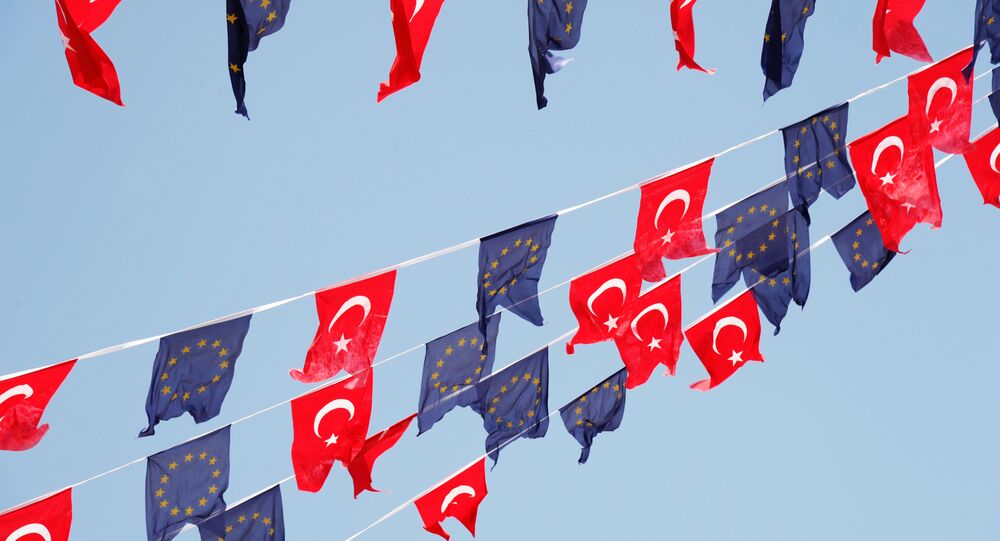 The war of words between Germany and Turkey is politically expedient for Berlin, while France is taking on the UK's traditional role as Ankara's champion in Europe, Associate Professor at the London School of Economics Dr. Esra Ozyurek told Radio Sputnik.

French President Emmanuel Macron has stressed the importance of avoiding a rift between the EU and Turkey, as relations between Ankara and Berlin remain strained.

Turkey is "an important partner in many crises we face jointly," Macron told the Greek newspaper Kathimerini, referring to the migration crisis and the terrorist threat.

Macron said that the deal between the EU and Turkey, which is intended to curb illegal migration to the EU by strengthening Turkish border controls and supporting refugee camps in Turkey, "produces results," and was "particularly necessary for reducing the pressure on Greece."

The French President's stated support for Ankara comes amid the deterioration of relations between Turkey and Germany. Berlin has called for the EU to take a harder line with Turkey regarding reported human rights violations in the aftermath of the failed military coup in July 2016.

Dr. Esra Ozyurek, Associate Professor and Chair for Contemporary Turkish Studies at the London School of Economics' European Institute, told Radio Sputnik that France's support for Turkish integration with the EU should be seen in the context of the UK's exit from the bloc.

"The UK has been the strongest supporter of Turkey's integration with the EU. In the absence of the UK, France is now taking on the role of having an alternative view. The UK has been invested in a weaker European Union, so they imagined that an EU with Turkey in it would be a looser union."

© AP Photo /
Rock and Hard Place: Berlin Chooses 'Kowtowing to Erdogan' Over Spat With NATO
With Germany facing federal elections later this month, Turkish President Recep Tayyip Erdogan has referred to German politicians from the ruling CDU and the SPD as well as the opposition Greens as "enemies of Turkey" and has called on Turks in Germany not to vote for them.

Far from harming Merkel, who is ahead of her main rival Martin Schulz in opinion polls, the dispute with Turkey has buttressed her reputation among voters, Ozyurek explained.

"Clearly having a tough stance towards Turkey is also helping her. Turkey has this role among the European leaders, that taking a strong stance against them, during elections, definitely increases the leaders' standing."

"Merkel is also taking this stance because it looks like the war in Syria is about to be over and many of the people who wanted to leave Turkey already left," which reduces the pressure on the EU and Turkey to take in refugees and come to a political agreement on how to care for them.

© REUTERS / UMIT BEKTAS
US-Turkey Tempers Flare as Erdogan Calls Charges Against Ex-Minister ‘Purely Political’
The biggest losers amid the deterioration of relations between Ankara and Berlin are Turkish citizens living in Germany, an estimated 1.5 million people.

"If Turkish Germans go along with it, they are the ones who will be more marginalized, potentially losing their right to dual citizenship, ability to keep their institutions and receive support from Turkey. It will be to their disadvantage."

Ozyurek said that several statements by Turkish President Erdogan overestimate Ankara's influence on the diaspora living in Europe, including his instructions to Turks in Germany on how to vote.

"Turkish Germans traditionally vote for Social Democrats, because they [usually] have a working [class] background. They will vote for the parties that they see as benefitting them, they are not going to follow what Erdogan tells them to do."

"In the Dutch case, he said, 'our population in the Netherlands is bigger that the Dutch army.' Those things are baseless, I really cannot imagine Turks in Germany taking to the streets or having a riot."

© AP Photo / Tolga Bozoglu
Erdogan Again Lashes Out at Germany, Says Merkel-Schulz 'Anti-Turkish' Comments Are 'Nazism'
Like many other leaders around the world, President Erdogan is becoming "more and more nationalist and isolationalist," but he is also inclined to rapidly change his political positions, Ozyurek said.

"Throughout his rule, over the past 12 years, Erdogan has changed his position so rapidly. He was pro-EU, now he's colder towards the EU. He was the leader who pushed for a peace process with Kurds, now he's against the Kurds. In many positions, [for example] his relationship with Russia, [he] has changed so rapidly."

"So, it's a little difficult to know. I guess the worst and the best side of Erdogan is his pragmatism. So, if he sees that now developing relations with the EU will be an asset to him, I can imagine that he again turns in that direction."

US Aviation Security Enhances Screening of Cargo From Turkey